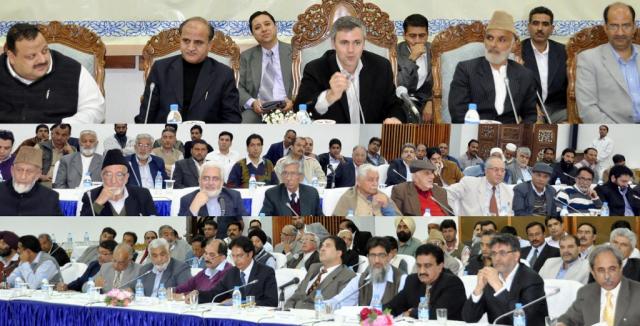 Srinagar, May 22 (Scoop News) –On G. Pant Hospital, the Chief Minister Omar Abdulla today said that the major failure in reporting the condition and status of the hospital by the concerned management to the top level in the government made the things more worst.

“Soon I received the details of shortcomings of the hospital, immediate measures both on administrative and service delivery disciplines were taken and we expect improvement within days”, he said adding that a capable Medical Superintendent has been made in-charge of the hospital besides taking corrective measures required for the improvement its functioning.

Giving all credit to people for making 2011 year of peace, Omar  asked the civil society to render same wholehearted support to the government in maintenance tranquillity and to help carry peace dividends to every area in the shape of development and economic welfare.

“Despite excuses provided to create law and order situation, it is highly laudable that people denied to fall prey in the hands of vested interests and assured peaceful situation to prevail in the state especially in valley”, he told the prominent members of the civil society at a marathon interaction session with them at SKICC here which lasted for about five hours.

Chief Minister expressed satisfaction over the positivity of the situation and people’s determination to help maintain peace in the state. He said that it was heartening to note that for the first time during the last three years the members of civil society did not raise any issue relating to the misuse of power or high handedness by security forces in this level of interaction session.

“In a similar level of meeting last year held in this hall you were apprehensive about the law and order situation and your main focus was on this subject. In contrast to that you today concentrated on development side and also praised various initiatives of the government taken for peace and development in the state which is indeed encouraging”, he added.

“Government would devote fullest attention in maintaining peace and carrying forward development agenda with commitment and missionary zest”, he said and asked the hand of civil society in this stupendous task. He expressed the hope that peace will further root and economic prosperity flourish extensively.

“You have seen the benefits of peace by witnessing holistic development in all sectors with highest tourist boom. It also paved the way for removing 40 bunkers alone from city and many more in other parts of the valley. It also helped to reduce the number of security forces”, he asserted.

The Chief Minister made it clear that rehabilitation of traders, affected by widening of roads and raising of other public service infrastructure, has been flagged pre-requisite. “Agencies concerned have been directed to attend to it on priority”. He said that he has directed the concerned to start earth breaking for prestigious, Rs. 256 crore- Jehangir Chowk Flyover only after completing the rehabilitation of affected traders.

“We have assured adequate funds supply by Asian Development Bank for this project and it will be completed in only 30 months after the launch of construction work”, he explained and said that soon after rehabilitation of traders, which is in its final stage, the utility shifting will take place.

On international status of airport, Omar Abdullah said that in fact denial by to allow flights from over their air space to foreign countries has put big question mark to this prestigious programme. “This is strange that our neighbour is allowing flights from any State of India over their air space excepting . We hope the better relations between the two countries will help to remove this bottleneck so that people in get benefitted equally”, he said and expressed hope that the friendship ties between the two countries would get further strengthened.

Omar said that in his recent meetings with Union leadership including Prime Minister and Home Minister, he has underlined the need of reducing the security checks at airport which were imposed at the time when militancy was in peak. “Situation is now reverse demanding re-looking of the aspect to make travel of people of the state and the visitors hassle free”, he said adding that cumbersome searching and burdensome security checking need to be eased in changed circumstances now.

“I have also talked with Union leadership about the need of giving total control of civil airport to Civil Aviation Authority relieving Air Force from the job. This would further help to restore the civil status of airport”, he said and maintained that he would continue to advocate and work for this proposal. However, the Chief Minister expressed satisfaction over the enhancement of flying schedule which begins at 7 in the morning and ends at 5.30 p.m. He said this has helped the visitors and air passengers a lot.

On tourism, Omar said that this sector is of significant economic importance for the state. “While we are concentrating on opening new destinations for tourists, equal thrust is on the development of adventure, sports and pilgrim tourism. He said that good roads and better tourist infrastructure along with best possible service are important ingredients to flourish tourism. He asked all the stake holders in this sector to work jointly to achieve new goals in the development of tourism sector in the state.

Omar said that Houseboat is the heritage of the State and its extinction would not be allowed at all. He said government would provide all possible help to the owners of Houseboats to maintain these and extend best service to the visitors and flourish economically.

All the speakers expressed satisfaction over the prevailing law and order situation in the state and praised the initiatives of Omar led government to maintain peace and carry forward development to all areas.

They also praised the initiative of the government regarding launch of traffic signals and demanded expansion of this system to other areas in the city.

Appreciating the endeavour of Chief Minister for making public reach important feature in his day-to-day schedule to remain apprised of the developments on various fronts and be posted with the public difficulties and grievances, the civil society members stressed on frequent interaction meetings by all ministers with the civil society at constituency level.

The Chief Minister heard their views and said these would be given due consideration while formulation policies and making decisions on development front.