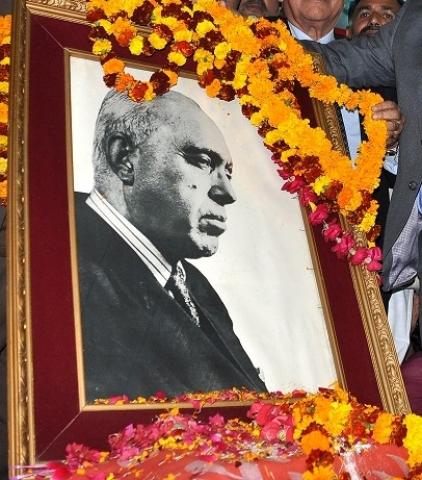 Srinagar/Jammu, December 05 (Scoop News) –Jammu and Kashmir Chief Minister, Omar Abdullah Monday reiterated his vow for restoration of peace and political stability in the State to give meaningful forward push to the development and seek economic prosperity for the people.

“My endeavours will go on unabated in this direction”, he said asserting that benefits of peace would reach to the people in all the fields of life.

Addressing a large public gathering at Kokernag after inaugurating power grid station as a part of the birth anniversary celebration of the late Sheikh Mohammad Abdullah, the Chief Minister said that there will be no letup in his struggle to gradually see-off the laws like AFSPA from the State which have served their purpose, to make people relish the fruits of peace.

Taking a dig on the double speak of PDP, the Chief Minister said that the party talks in three different tones about AFSPA at three different places of , and . “While the party talks in favour of revocation of this Act in , its leadership keeps mum about it in and at , they make the revocation of AFSPA sub-servant to the desire of the Army”, he said challenging PDP to speak in same tone about AFSPA in as it speaks at .  He ridiculed this practice of gimmicks by the party to mislead people.

“People are wise enough to understand the designs behind PDP’s double speak as they have experienced this characteristic of the party since its inception in the politics”, he said adding that the point of view on AFSPA advocated by him would be maintained. “We would continue to work steadfastly about it”, he emphasized.

Omar Abdullah said that the forward movement of his Government on political stability and development process is on. “Without making noise for the path braking initiatives taken and significant achievements registered by my Government during the last three years is amply visible”, he said adding that actions speak louder than words.

On National Conference-Congress relations, Omar Abdullah said that these are cordial and would continue to grow further with the passage of time. He said both parties are working jointly for achieving the goal of peaceful and progressive .

Omar Abdullah said that the cordial relations between National Conference and Congress existed right from the times of Sheikh Mohammad Abdullah and Pt. Jawahar Lal Nehru, s. Indira Gandhi and Sheikh Sahib, Dr. Farooq Abdullah and Rajiv Gandhi and presently between him and Sonia Ji and Rahul Gandhi.  He said coalition would further strengthen for the larger interests of the people of .

Referring to the disagreements and quarrels taking place between various ministers in the coalition government led by Mufti Sayeed, Omar said that such clashes were clearly visible during that period and it was the permanent feature of the Cabinet meetings then.

Correlating development with the availability of electricity, the Chief Minister said that in a State like the economic growth and holistic progress directly depends on a self-reliant power sector. “Unless we are self-sufficient in the generation of electricity, we cannot make necessary dent in the industrial development and promotion of other economically important sectors”, he said adding that the State Government has to bear over Rs. 2000 crores as losses on the supply of electricity to the consumers in the State per annum.

“This grim scenario largely affects the development and puts hurdles in the process of generating employment for youth”, he said and asked the people to cooperate with the Government by making timely payments of tariff and shunning the illegal use of electricity.

Explaining the efficacy of Public Service Guarantee Act (PSGA) to ensure prompt service delivery to the people by the government departments and reduce the chances of corruption, the Chief Minister said that this initiative of his Government is one among the first few legislations enacted by some States in the Country.

“We have amply empowered the people to receive the designated services under the Act within the prescribed time frame and made administration legally bound for the same”, he said the erring officials are liable to punishment and affected consumer entitled for compensation. He asked the people to take best advantage of the Act and get various public services delivered in the departments of Transport, CAPD, Power, Revenue, PHE and Housing within the prescribed timeframe fixed for each service.

“I have directed the departments of power, transport, public health engineering, consumer affairs and public distribution, revenue and housing which come under the ambit of Public Service Guarantee Act, to install boards in the premises of their offices across the State in Urdu, Hindi and English giving details about the services and the timeframe these offices are bound to provide to the people. I have also told them to give details about the fine to be imposed on the erring official and the compensation to be paid to the consumers for not receiving the service within the stipulated time period”, he said and asked general people to check the presence of these boards in the office premises of these departments and if they find these missing they should report to concerned Deputy Commissioner as also to the office of the Chief Minister.

The celebration of birth anniversary of Late Sheikh Mohammad Abdullah on 5th December was marked with the inauguration of five development projects and laying of foundation to equal number of works by Chief Minister, Omar Abdullah across the State on Monday.

The 50 MVA, Rs. 17.52 crore, 132/33 KV Grid Station Lissar, Sagam would improve power supply in South Kashmir particularly in the areas of Dooru, Hillar, Kokernag and adjoining areas while the Grid Station at Ramban has been completed at a cost of Rs. 42 crores. The 220/132 KVA Ramban Grid Station will benefit the districts of Ramban, Doda and Kishtwar. It will give boost to the developmental activities and help fast tracking of railway project. The 120 MVA Grid Station will also pave the way for construction of two more grid stations at Bhallesa and Kishtwar. The Employment Council Centres at Ganderbal and Samba inaugurated by the Chief Minister have been completed at a cost of about Rs. 2 crores.

The Physical Education complex at Ganderbal is likely to cost over Rs. 32.29 crores. It envisages construction of 200-beded boy’s hostel, 50-bedded girl’s hostel and administrative block. The at Pampore is estimated to cost over Rs. 15 crores. The college is likely to be made functional from the next academic session.

The at Samba of which the Chief Minister also laid foundation is likely to cost about Rs. 13 crores. A piece of land measuring 73 kanals has been providing for the establishment of the Polytechnic Institute at Samba. The JKPCC is constructing agency for the college.

The Data Centre at PDD complex Bemina, and Data Recovery Centre PPD Complex Gladni, , of which Chief Minister also laid foundations, envisage application of Information Technology for Power Sector Reforms aiming at establishment of accurate and reliable baseline data. The setting up of these projects is a part of Revamped Accelerated Power Development Reforms Programme (RAPDRP). The programme has been launched in the State at a cost of about Rs. 200 crores and 30 towns in the State are been covered under it.

The Data Centre will serve as nerve centre for the activities relating to the power distribution, consumer service, metering, billing, revenue collection, reconciliation and customer care. The cost of civil infrastructure is likely to be about Rs 4 crores and the completion target for civil works is 2012. The centre will be equipped with modern computer hardware and software worth Rs. 48.5 crores.

The Data Recovery Centre at and Data Centre at will be linked by a dedicated 10 Mbps link for providing live back up to each other and shall immediately take over in case anyone fails or crashes thus maintaining the continuity of the work. It shall be the mirror of the data centre and be live at all times.

The Data Recovery Centre is likely to involve about Rs. 2 crores for civil works while computer hardware and software will cost about Rs. 25 crores. Along this facility SCADA is also being raised.

The work on various major projects for which Omar Abdullah laid foundation on this day previous year are in the last stage of completion and are likely to be dedicated to the people soon.

The Chief Minister along with Union Minister for New and Renewable Energy and President NC, Dr. Farooq Abdullah visited the mazaar of Sheikh Mohammad Abdullah at Hazratbal offered Fateh and paid floral tributes to the late leader.