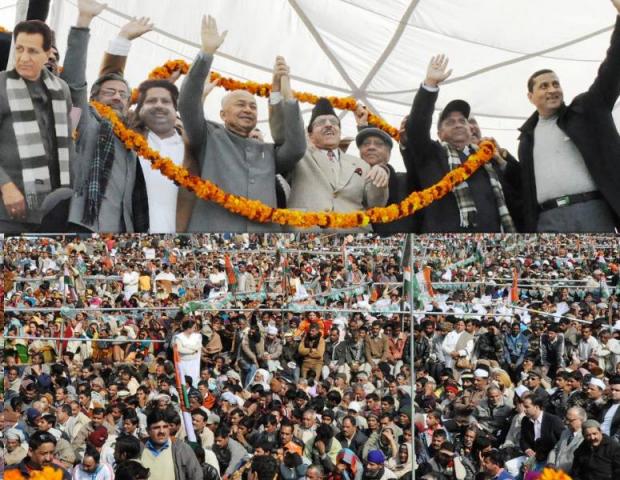 ,January 30 (Scoop News) – Union Minister for Power  Sushil Kumar Shinde paid rich tribute to Mahatma Gandhi on his 63rd martyr day. He further said the people of have faced lot of hardships during turmoil adding that the people of the State always helped the State and Central Government in maintaining peace and tranquility in every nook and corner of the three regions. He said it is first Congress rally in his life where all sections of the society participated in large numbers.

He said UPA Chairperson s. Sonia Gandhi always work for the welfare of minority and down trodden sections of the society. He said central Government is committed to provide liberal funding to the State Government in every sector adding that dream of the Government to make every corner on modern lines.

Shinde apprised that the work on Kishan Ganga Hydel Power Project is under execution adding that the work on other mini and micro hydel power projects will be taken into hand. He said Centeral Government is planning to construct 1000 MVA Gas project at Pathankote for providing adequate electricity to the people of the State.

Prof. Soz also paid rich tributes to Father of Nation Mahatma Gandhi. He said once Bernard Shah said ‘though Gandhi Ji is not rich but so powerful. He asked the party leaders and workers to make Congress strong and said that a strong Congress will be able to serve the people in better way. He said that Congress has always advocated balanced and equitable development of all three regions as it strengthen the  bond of unity and integrity of the state.

Cautioning the people about the communal and divisive forces in the state PCC Chief said that , and Ladakh have to stay together and people should understand the designs of such forces and strengthen secularism, unity and integrity of the state.

He said BJP always misled the people for their vested interests and befooling the people on religions and politics. He said BJP is not playing role true opposition in the parliament. He said the Congress party is planning to start mass campaign to aware the people about the policies of the UPA Government.

In his address, Minister for Revenue, Relief and Rehabilitation,  Raman Bhalla welcomed the Union Power Minister in the city of temples and said Congress is only secular party who fulfill the aspirations of people of the country. He said dream of the UPA chairperson and Prime Minister Dr. Manmohan Singh to develop J&K State as a model State for which the Central Government has provided liberal funding.

The Minister said for the upliftment of , ST and farmer communities, the Government has constituted separate advisory boards with its Vice-Chairmen so that the hardships of the people could be resolved on priority basis without any delay.

Bhalla also paid rich tributes to Mahatma Gandhi on his 64th death anniversary and said Gandhi Ji developed a method of action based upon the principles of courage, nonviolence and truth called Satyagraha. He believed that the way people behave is more important than what they achieve. Satyagraha promoted nonviolence and civil disobedience as the most appropriate methods for obtaining political and social goals.

Paying glowing tributes to Mahatma Gandhi Ji, the Minister for Medical Education, Prof. R. S. Chib threw light on the life and work of Father of Nation. He said Gandhi Ji always used the principles of Satyagraha to lead the campaign for Indian independence. He said Gandhi ji had been an advocate for a united where Hindus and Muslims lived together in peace.

Chib said aim of the Congress leadership to remove poverty from every nook and corner of the country. He said Congress is the only party which always stands forefront for the unity, integrity and maintaining communal harmony in the country. He appealed the people to strengthen the hands of Congress in coming Panchayati elections in the State. He said the Gandhi ji’s death anniversary is celebrated anti-leprosy day throughout the world.

Sham Lal Sharma said that Congress was always stronger unit in the State but during the tenure of Prof. Soz the party has gained momentum. He said that party’s vote bank has increased considerably.

Paying glowing tributes to Father of the Nation, the Minister said that Gandhi ji always struggled for the upliftment of the weaker sections and downtrodden of the society.

In his address  Shabir paid rich tributes to Father of Nation. He expressed his gratitude to the Union Government for providing full financial assistance in Power sector. He said the work on Nimo Basgo and Chutuk power projects are nearing completion and will be inaugurated in current financial year adding after commissioning the projects, the power supply would be improved to large extent in the State. He requested the Union Minister for according early approval of 1020 MVA Sawalakot and Brasal Power projects in the State.

Earlier, a impressive function was organized by the members of the Mahatama Gandhi Intellectual’s Society on Martyrs Day (64th death Anniversary) of Father of the Nation Mahatama Gandhi Ji) at Gandhi Chowk, Satwari in Jammu Cantt.

On the occasion, they lauded the role of Mahatama Gandhi Ji and appeals to the public to follow the steps of non-violence, peace and brotherhood.