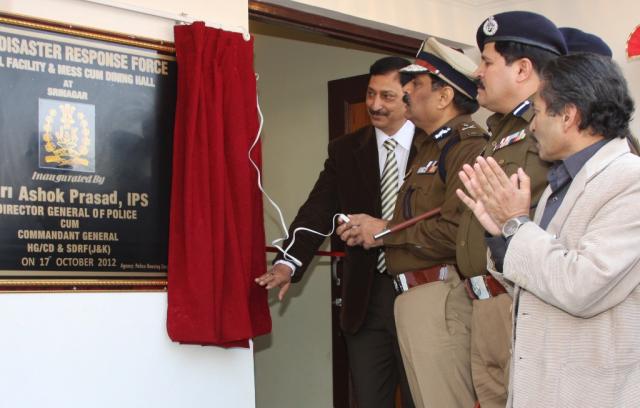 , October 17(Scoop News) –   Police is upgrading building infrastructure to provide better living and working facilities for its personnel. Among other components this is one of the focussed areas for the Organization to enhance facilities for its jawans and officers across the State.

This was disclosed by the Director General of Police (DGP),  Ashok Prasad, while commissioning a 3-storey building at State Disaster Response Force (SDRAF) Battalion Headquarter here this morning. He said that the Organisation is focussing to strengthen its all components to upgrade its performance in all fields of policing and building infrastructure has remained on top priority in view of increasing manpower during the previous years.

The DGP who is also Commandant General of SDRF, disclosed that with the completion of the building consisting of three barracks, the living facilities for the SDRF personnel working in the capital city would be enhanced. He disclosed that the building which has been completed within a record period of 18 months at a cost of Rs. 60 lakhs by Police Housing Corporation (PHC) is equipped with latest facilities and requirements. He said that it was a dire requirement for the personnel easing their hardships, which “men in khaki” face while discharging their duty.

Prasad appreciated the efforts of officers and engineering staff of PHC for completing task within a record period. He said that the Corporation has been doing a commendable job for upgrading the infrastructure in far-flung areas for jawans and officers. He asked them to ensure use of quality material in the construction of buildings and proper supervision by the senior officers which would make their performance more effective.

Earlier, Managing Director PHC,  Alok Puri briefed the DGP about the construction of the building. He said that while constructing the buildings requirements of jawans working the area and the weather conditions are kept in mind to get desired results.