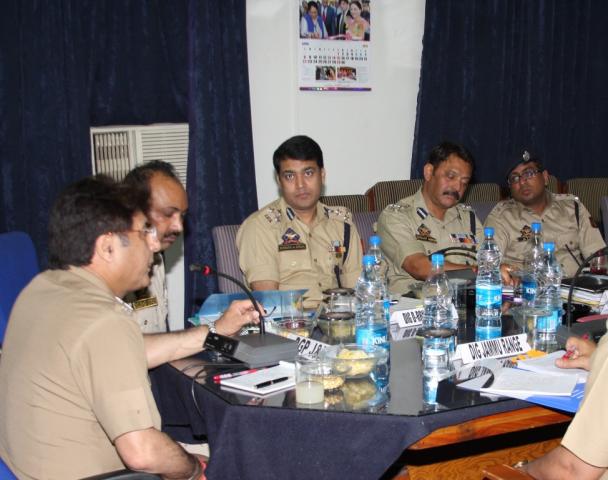 , April 09 (Scoop News) –    The Director General of Police (DGP),  Kuldeep Khoda has stressed upon the cops to chalk out an effective mechanism to deal with the challenge of crime firmly. He said that the investigation process should be stepped up to bring the culprits to justice.

Khoda was addressing the police officers meeting at Police Control Room (PCR) here today. The meeting was convened to review the crime scenario in Jammu Division and was attended by Inspector General of Police Jammu Zone, besides range Deputy Inspectors General of Police and District Superintendents of Police of the Zone. He lauded the role of police for its achievements on various fronts during 2011 and said that efforts should continue to make improvements, keeping in mind the experiences of the bygone year. Executive police plays a vital role in maintaining law and order and control crime  , and the important pillar of the organisation should be further strengthened at all levels, said the DGP. Coordination among different agencies and public cooperation could lead to more successes, he added.

The DGP said that every evil should be nabbed before it raises its head and poses challenge to the law enforcing agencies. Counselling for the youth involved in drug addiction and crimes, in collaboration with other departments like health, can prove fruitful in eradicating the menace, he asserted.

Alarming situation in suicidal deaths due to mental depression and domestic violence also needs to be addressed, he said adding that public cooperation achieved through community policing can help in controlling the situation. He stressed upon the officers present in the meeting to focus on various situations which attract the youth towards the evils and for this purpose community policing should be improved further. He directed that crime data and records at the police station level should be updated and the supervisory officers should conduct random inspections to ensure that the grievances of the public are addressed promptly.

The meeting also discussed traffic management, functioning of CCTV cameras and measures for smooth conduct of forthcoming Shri Amarnath Yatra. The DGP asked the officers to take effective steps and ensure a better management especially on National Highways. He said that violators should be booked under law to check road accidents, traffic james and overloading. “CCTVs installed at various locations should be utilized to identify the culprits which could help to book them under criminal law” he said.

Khoda said that by the painstakingly efforts of jawans and officers of the force in coordination with other security agencies, last year yatra concluded peacefully. Again keeping in view the experience, deployment of man power should be made all along the yatra route and places of stay for the security of pilgrims. Intelligence gathering should be sensitized to check the activities of anti-national elements.

Earlier, the Inspector General of Police, Jammu Zone,  Dilbag Singh gave a detailed resume of the achievements of Jammu Police on different fronts during the year 2011. He said that the jawans and officers of the force have performed their professional duties in a befitting manner and achieved great success on anti-militancy front during the year. He said that strenuous efforts have been put in place to bring the crime graph to its lowest ebb adding that all ranks working in the field have been made accountable to redress the grievances of the people so that they feel secure in a congenial atmosphere.