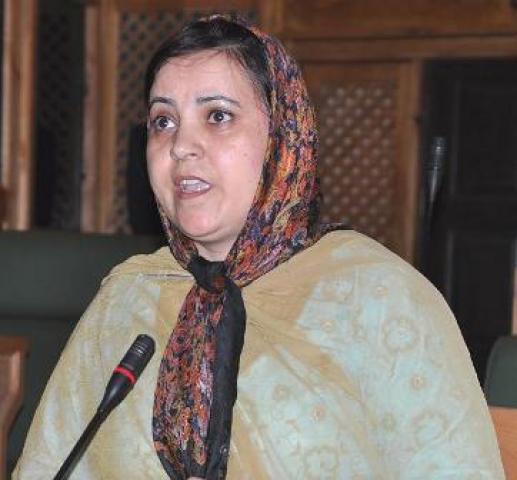 Pulwama/ Srinagar, October 23 (Scoop News) -Calling upon officers to implement properly all schemes run by social welfare department, in their respective areas, the Minister for Social Welfare, Ms Sakina Itoo, today, instructed them to adhere strictly the norms fixed by the Centre for various welfare schemes.

This was stated by the Minister while reviewing the progress of implementation process of different social welfare schemes run by the department in Pulwama and Shopian districts, at an officers meeting, held here today.

She instructed the officers to speed up the process of pension disbursement and ensure that the amount earmarked for the schemes for current fiscal is utilized in full.

She impressed upon the officers to give priority to the Students enrolled in the Government Schools for sanction of post and pre-matric scholarships.

Regarding allotment of shelter sheds, under Indra Awas Yojna, the Minister asked the officers to keep close rapport with the officers of Rural Development Department and ensure that quota of 3% to physically challenged persons is adhered to in both the districts.

Ms Sakina asked the Deputy Commissioner and District Social Welfare officers to get established a separate counter in concerned J&K Banks for the convenience of the beneficiaries, including old age pensioners and physically challenged persons.

It was given out that  Rs. 25.54 lac would be disbursed under pre and post-matric scholarship to 5000 students belonging  to other backward classes (OBC) of Pulwama district, while Rs. 1.66 lac have earmarked for physically challenged students of the district. In Shopian, Rs. 7.83 lac pre-matric and post-matric scholarships have been disbursed among the deserving students. the meeting was told.

Rs. 5 lac have been disbursed under rehabilitation of militancy affected persons in Shopian during current fiscal, while in Pulwama Rs. 12.45  lac stands expended so far.