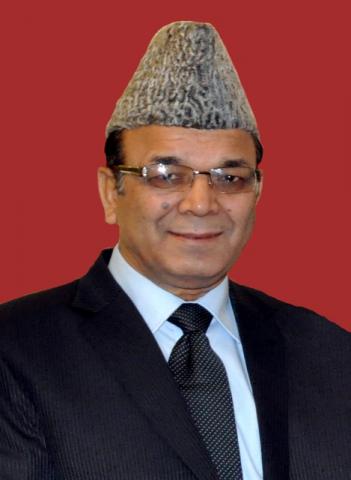 Jammu, January 18(Scoop News) –The Minister for Finance and Ladakh Affairs’,  Abdul Rahim Rather today asked the Disaster Management Committees (DMCs) both at Divisional and District levels to respond swiftly in the wake of weather forecast about heavy snowfall and possible snow avalanches in different winter zone areas of the State adding that an all time and fool proof mechanism needs to be put in place and kept in the state of readiness to meet any eventuality.

Asking the heads of different DMCs, comprising Divisional Commissioners and Deputy Commissioners to immediately activate Central Control Rooms in their respective areas of jurisdiction,  Rather said there should be no room for any lapse adding that the Public delivery system should, in no case be allowed to get affected. He said these committees have been constituted with a broader perspective to put in place advanced remedial measures to take care of eventualities incase of any natural calamity so there should be no scope for any compromise in this regard. “Administration is accountable and answerable before the people”,  Rather added.

Rather has directed the concerned officers and field agencies of Divisional and District administration to press into service all the available men and machinery to clear snow from roads for ensuring un- interrupted vehicular movement on all routes including both intra district and inter district roads. He has directed for operationalization of round the clock control room for closely monitoring the situation in case of vagaries of weather and possible snow avalanches especially in the upper reaches adding that people should be kept informed about the telephone numbers of these Central Control Rooms for use in case of any emergencies. He said presence of all the concerned officers, engineers and field agencies in their respective areas should be ensured so that people are not put to any inconvenience or hardships due to any laxity on the part of administration.

Rather has also called for ensuring availability of adequate quantities of essential commodities including rice, atta, sugar, kerosene and cooking gas in all the habitations especially in remote and inaccessible areas.          He also called for submission of stock and off-take position in various godowns of the CA & PD on daily basis to the government, during the entire winter months for close monitoring about the availability of essential commodities in the snow affected areas of the State.

Rather has also called for activating different market checking squads to check black marketing, hoarding and profiteering by unscrupulous shopkeepers and traders, who are habitual to get undue advantage of the weather and road conditions during the winter season. “All such attempts aimed at fleecing the people in garb of weather and road conditions should be curbed sternly”,  Rather directed and called for devising an all time, fool proof and practicable market surveillance mechanism to defeat motives of unscrupulous traders and other elements. He has also directed the concerned DDCs to ensure punctuality of staff in every Government establishment so that Peoples’ grievances are redressed appropriately. In this regard, he made a special mention of Tehsil Offices and Niabat, PHE, Health, CA & PD, Power and R&B departments adding that stern action shall be taken against the employees who are habitual of missing their duties and late comers.