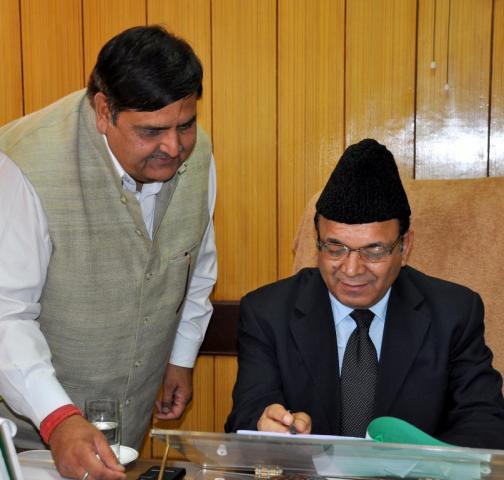 Jammu, March 5 (Scoop News) -The Minister for Finance and Ladakh Affairs Abdul Rahim Rather gave final touches to the Budget 2013-14 at civil secretariat on Tuesday March 5,2013.

It is the 5th budget in a row of the present coalition Govt. to be presented in the J&K Legislative Assembly by  Rather tomorrow at 11am.

Speaking on the occasion,  Rather said that he will make every effort to address the genuine concerns of the people, while finalizing the budget proposals. He said the budget proposals to be presented by him tomorrow will be discussed threadbare by the members of the J&K legislature adding that good and genuine suggestions of the legislators will be given due consideration to make next year’s budget representative to the urges and aspirations of the people. He said every member will be given an opportunity to express his views on the budget and present his suggestions for further betterment of different departments as well as development of their respective constituencies.

Rather said, before formulating next year’s budget, he has undertaken an exhaustive pre-budget exercise with all stakeholders including trade, industry , transporters, intellectuals, academicians and progressive farmers of both Jammu and Kashmir divisions to get first hand appraisal of their demands and suggestions.

The economic advisor to Govt. Jalil Ahmad Khan and Principal Sec. Finance B.B Viyas were also present on the occasion.