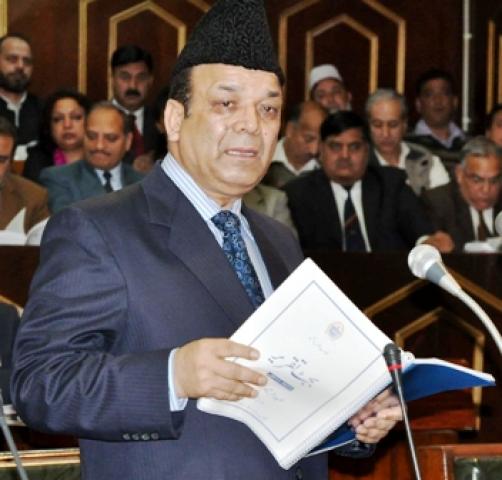 In his about 80 minutes long budget speech,  Rather said that during the next year’s budgetary proposals the main emphasis has been on to accelerate the momentum generated so far in the process of socio-economic and welfare of the people adding that the ultimate aim is to bring the major indexes of development of our state at par with All India averages.

JK Finance Minister in his speech said that the current financial year has been witness to the consolidation of peace and order in our state. The number of tourists, who visited and Ladakh region and pilgrims to Shri Mata Vaishno Devi Shrine and Shri Amaranth Ji Yatra has surpassed all the previous records. These numbers signify the growing confidence of the visitors in the persistent efforts and capability of the government in restoring peace and order. A new era of peace and prosperity for our people has truly begun. The improved environment has also helped us in a more effective implementation of our plan schemes and budgetary programmes of socio-economic development.

At the national level, there has been a setback in the process of economic revival due to deterioration in the global economic scenario. It will cast its shadow on the national approach to the plan process. We may also be affected indirectly. However, in our State, we start with the advantage of the consolidation of peace and economic growth. Building further on this consolidation, we intend to incorporate new strategies in our next year’s plan of action. We are hopeful that our suggestions shall receive due attention of the Planning Commission at the time of finalizing our plan.

We have maintained our journey on the path of structural reforms and sound management of State finances through the last three years. These are yielding results now. We are determined to continue our march towards a better future with renewed vigour.

He said that ,I would like to submit here that the three previous budgets presented by me before this August House, were much more than mere statistical statements of income and expenditure. They were reflective of a pre-meditated and progressive plan of action to trigger, stimulate and sustain socio-economic growth and ensure the welfare of the people of our state. All these action plans were conceived, formulated and executed by the government under the able, determined and courageous guidance of our young, energetic and dynamic Chief Minister Omar Abdullah.