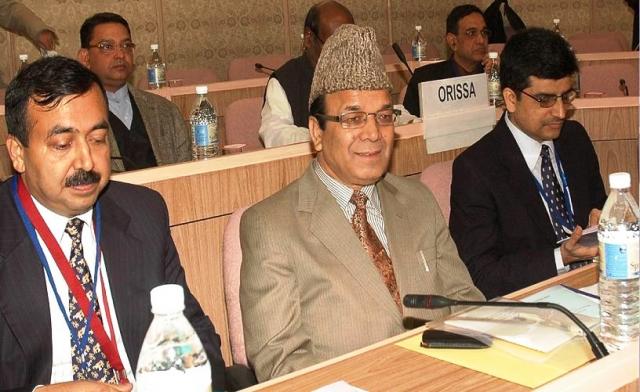 Delhi/Jammu, January 19 (Scoop News) – Maintaining that exploitation of local hydel resources was imperative for meeting the future energy needs of the State, the J&K Minister for Finance,  A.R. Rather today sought liberal financial support for various hydro-electric projects (HEPs) by suitable augmentation of the State plan.

Speaking at the pre-budget conference of State Finance Ministers held here today under the Chairmanship of Union Finance Minister,  Pranab Mukherjee,  Rather also sought expeditious investment clearances by the concerned Central institutions  and provision of adequate funding in the next year’s Union Budget for various hydro-electric project identified for execution. He said that State Government has handed over several identified sites to the National Hydro-Electric Projects Corporation (NHPC) for execution of hydro electric projects. Additionally, MoU has been signed long ago to execute three projects viz Pakaldul Kiru and Kawa with a total capacity of 2120 MWs in joint sector between NHPC and the J&K State Power Development Corporation. "Early completion of all these projects is necessary not only for J&K but also in the national interest.  Rather said adding that similar priorities also need to be given in respect of other Central investments in the State including improvements to the National High Way 1A, Udhampur- Qazigund Railway line, thermal project of NTPC and other projects under implementation and those to be undertaken in near future by any Central government agencies or CPSUs,”  Rather added.

Rather, who was accompanied by Commissioner Secretary, Finance,  Sudhanshu Panday, said the J&K State Power Development Corporation shall be commencing work on execution of Baglihar HEP II and Swalkot HEP in near future. "We shall need additional capital to meet the full equity requirements for ensuring financial closure of these projects", he said adding that the requirements being huge cannot be met within State’s normal annual plan outlay.  "Deferment of any of these projects or slowing down the progress thereon shall not be in our interest and needs to be avoided by way of providing adequate financial support".  Rather added.

Seeking personal initiative of the Union Finance Minister for improving the export environment in the State,  Rather said that State’s carpet manufacturing industry, which is our major exchange earner and sustains large scale employment needs augmentation as the industry has not yet fully recovered from the impact of global economic meltdown. He also sought Central support for boosting tourism in the State.

Rather also pleaded for relook on State’s long pending demand for reimbursement of security related expenditure on certain crucial security items which could not be adequately accommodated by them so far, adding that this way already scarce State resources could be utilized for its developments needs.

Describing the pre-budget consultations with the State Finance Ministers as extremely useful exercise, given the need for coordination and cooperation between Central and the State Governments in meeting the challenges for sustained growth,  Rather said "since many of the budgetary approaches are common between the Centre and the State, a lot is learnt from the interactions made in pre-budget State Finance Minister’s conference for preparing the State budget".

Rather said that the Union Budget, apart from reflecting the fiscal and monitory policies of the Union Government and the budgetary demands of its Ministries, also reflects a sizable chunk of the financial allocations to the States as per Awards of the Finance Commissions as also the block of development assistance from the Centre in supplementing the efforts of the States to achieve the socio economic goals set up at the national level in the shape of their annual plans.

Rather sought to protect the current year’s Plan outlay of Rs. 6000crore by augmenting the resources adding that “ in the current financial year, the Consumer Price Index has behaved in an extremely abnormal fashion. "Apart from causing problems to the public at large, this has also necessitated release of DA installments in favour of the government employees and State pensioners much beyond the levels anticipated in the original budget estimates, thereby squeezing the development efforts of the state Government. "A similar phenomenon is apprehended during the next financial year and we intend to seek suitable growth in the plan outlay to take care of the immediate development needs,  Rather said adding in fact the State needs even more liberal Central support than that made available in the current financial year”.

Rather said the double digit inflation, especially the increase in the price of food articles has posed multiple problems of administrative and financial nature to the government at the Centre as also the Governments in the states, and suggested that next year’s Union Budget, this problem shall be upper most while dealing with the macro economic and fiscal policy issues.

Rather expressed his gratitude to the Union Government especially the Union Finance Minister for having recognized the peculiar problems faced by not only as local but as national issues, even having international ramifications. “These peculiar problems are already being tackled as national problems and may have to be tackled as such for some time more, the Minister added. He also sought special care of the Centre for accelerating the pace attained during previous two years both on developmental fronts as well as implementing the annual plan.