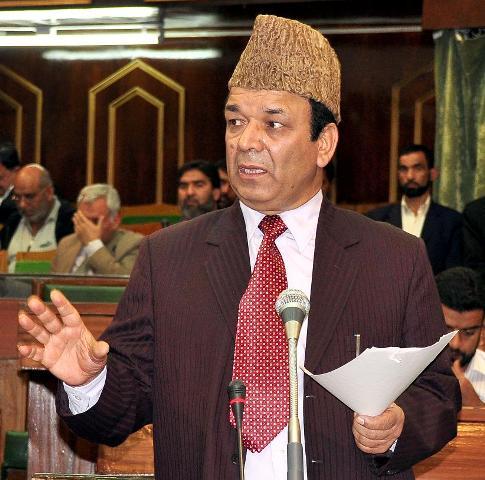 Jammu,March 10 (Scoop News) –-Asserting the State’s next year’s plan outlay of Rs 6600 crore is a realistic projection based on the pattern adopted by Planning Commission for scheme of financing the current year’s annual plan outlay, the Minister for Finance and Ladakh Affairs,  A.R.Rather today urged the need for sustained measures to improve the State’s burgeoning fiscal deficit, adding that it is the most concerning grey area.

In his two hour extensive reply to the general discussion on Budget, presented by him on March 7, 2011 in the Legislative Assembly,  Rather said though our tax revenue has improved considerably by introducing various reformative measures, a lot more is to be done to improve our non tax revenues. He said the state has even won applauds from the Planning Commission for generating highest ever tax revenue of Rs 3643 crore during the last year, adding that the State  has set a tax revenue target of Rs 4,183 crore during next fiscal marking, an increase of around 20 per cent. He said next year’s non-tax revenue collections have been estimated at Rs 1620 crore , up by Rs 313 crore over current financial year’s budget estimates of Rs 1307 crore.

He said the non-plan expenditure on salaries of the government employees inclusive of the provision for the two DA instalments which will become payable during the next fiscal is estimated at `Rs 11,360 crore which would be ` Rs 3,246 crore more than the current year’s Revised Estimates (RE) of Rs` 8,114 crore. The revenue component of the Plan Outlay works out to Rs`1,178 crore which is primarily on account of salaries of the staff borne on the Plan. In addition to this, the estimated requirement of grants-in-aid for the autonomous bodies and institutions has been worked out at Rs 727 crore as against ` Rs 482 crore estimated in the Budgetary Estimates (BE) of the current fiscal.

Rather said the expenditure on pensions and retirement benefits to the employees is estimated at Rs 2,651 crore during the next fiscal as against RE of ` Rs 2,031 crore in the current fiscal.

Responding to various queries of 39 members, who participated in the discussion on budget, the Minister said the implementation report of Fiscal Responsibility and Budget Management Act, is now being regularly placed on the table of the House for the last two years.

Rather said he would welcome suggestions of the members aimed at reducing the revenue expenditure.

Dispelling apprehensions that the new agreement with Reserve Bank of for Ways and Means,  Rather said the Cash Management Agreement is a reform measures which is in the overall interest and benefit of the people, depositors, J&K Bank and the government

Reiterating that Jammu and Kashmir Government’s ties with the Jammu and Kashmir (J&K) Bank are and will remain intact, the Finance Minister said that the outstanding Over Draft (OD) amount of Rs. 2300 crore would be paid to the J&K Bank very soon in totality out of which Rs 1300 crore stands already paid.

Maintaining that the State Government’s Ways and Means Advance arrangement with the Reserve Bank of India (RBI) is a win-win situation for the State Government, J&K Bank, and people of J-K, Rather thanked the 13th Finance Commission for coming to the rescue of the State Government by agreeing to provide one time grant to wipe out OD outstanding which had assumed the shape of structured deficit.

He reiterated that “the J&K Bank has been the banker to the State Government since long and it will continue to be so in the future also” and as Agency Bank appointed by RBI for the State Government for the new arrangemtns of Ways and Means. He said J&K Bank is a strong financial institution and could use the returned OD of Rs 2300 crore for other banking activities in priority sectors, adding that the State Government has 53 per cent shares in the J&K Bank and the government will always have investors and depositors interest on the top of its mind.”

He said the State Government’ over draft facility with the J&K bank had reached up to the saturation point, and infact practically, there was no, OD facility available to the Government now.

Replying to a question about the reasons behind the astronomical OD liability, Rather said that the successive governments after 2002 did not care about the repayment to the J&K Bank OD amount with the result “The OD outstanding has been there for last many years. When the National Conference demitted office on 10th October, 2002 the OD from J&K Bank was only around Rs. 800 crore which reached the figure of Rs. 2300 crore in March 2009 against the permissible limit of Rs. 1700 crore. As a result, the RBI would time and again reprimand the J&K Bank for violating the norms of MoU entered by the State Government with the bank,” Rather added.

Talking about the benefits of the new OD arrangement, the Finance Minister said it has four benefits which would benefit people of , said Rather.

“Firstly, the OD liability of Rs. 2300 crore will be wiped out in  one go with the help of union finance ministry in accordance with the recommendations of the 13 Finance Commission. Secondly, the OD facility for the State Government would be revived and the government can avail Ways and Means Advance in the time of need from RBI through J&K Bank. Thirdly, the State Government will save around Rs. 230 crore annually as earlier it had to pay the amount as interest on the outstanding OD. The amount will be used in the public welfare schemes.

Responding to queries of some members regarding Agriculture sector, the Minister said adequate allocations have been kept for Seed Replacement which is below the national average of 25%. He said to give boost to agriculture and allied sectors, toll on agriculture and various imports like fertilizers was exempted implements in the last years budget which has yielded better dividends.

Regarding alleged disparities with backward areas in the field of development,  Rather said, it was for the first time that Rs 100 crore has been earmarked in the budget to meet the requirements of neglected and bad pockets of the State which will be over and above the normal allocations.  Rather also highlighted the importance of SKEWPY and Entrepreneurship Development Institute in providing job avenues to the unemployed youth.

Dwelling on the employment policy,  Rather said, unlike past, the unemployed youth after imparting adequate training in a particular field at J&K Entrepreneurship Development Institute (EDI) are provided one-third (1/3) of the cost of project as seed money by the Government which is even non-refundable and the J&K Bank has been in clear terms asked to provide required loan facilities to such entrepreneurs within 2 months. The JKEDI has prepared about 600 DPRs whereas 316  cases with a loan assistance of Rs 41 crore and seed money of Rs 6.35 crore has been cleared. The government has set a target to establish about 15,000 income generating self-employment units under SKEWPY for next five years,  Rather said, adding that 91,000 unemployed yout, Matriculates and above,  have been brought under the ambit of Voluntary Service Allowance. He said about 16000 educated unemployed youth are getting VSA at present against 23000 youth registered under the scheme and an amount of Rs.6 crore has been spent so far.

However, the Minister expressed his concern over the power scenario and informed the house that major reform in the power sector is on anvil. He said annual power requirement has increased to 6% adding that advance planning would be made to generate 6000 MWs of power to meet the future requirements. He assured that all the contractual, contract and consolidated employees would continue to work till their regularization in the government service and their regularisation process is already in hand.