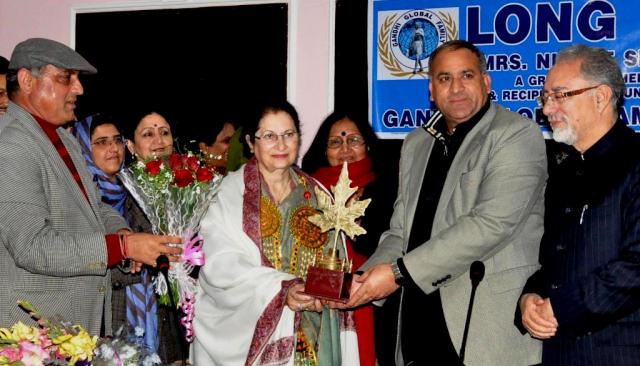 Mrs Pandita has been awarded for her outstanding work for development and welfare of women and children in the state.

The Minister of State for Power, Tourism and CA&PD,  Shabir Ahmed Khan, was the chief guest on the occasion, while   president GGF Padam Shree,  S. P. Verma was also present on the occasion.

The Minister, while congratulating the awardee, appreciated   her outstanding social work which she rendered for empowerment of women and welfare of children in the state, especially during turmoil period.

He said that Mrs. Nighat did commendable job during turmoil in Kashmir – the time when hardly anyone, especially a woman, would have dared to step out of the home to balm the wounds of the people. He said   Mrs. Nighat Pandit was visiting alone to affected inmates at Srinagar’s sole mental institution and tried to improve conditions there.

The Minister said that Mrs. Nighat Pandit has been working predominantly and extensively in rural communities of Kashmir and Jammu region. He said in the politically charged environment of Kashmir in those days, she has carved out a space for humanitarian work that is not aligned to the government or separatist groups.

The President Gandhian Global Family,  S. P. Verma in his address said that Mrs  Pandit also responded to natural disasters and conflict related issues outside the preview of HELPs traditional areas of work. He said she has worked for minority communities like Kashmiri Pandits, Sikhs and other vulnerable sections of the society.

He said the life of Mrs. Nighat Shafi has impacted the lives of hundreds of women and children. He said she has become a mother figure and an ideal for many.