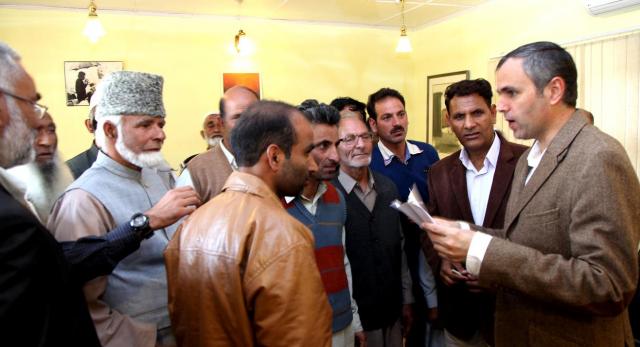 , October 02 (Scoop News) – J&K Chief Minister Omar Abdullah Saturday reiterated his government’s determination to reach out every area in the State for balanced economic development and upgradation of basic amenities.

“My government is committed to fulfill the promises made to people on development and every step is being taken in this direction”, he said adding that despite hindrances due to the law and order situation in parts of , the development process has been given forward push. “The administration at all levels has been sensitized to carry forward development with full endeavour”.

Speaking to scores of individuals and dozens of deputations from across the Valley who met him at ‘Awami Mulakat’ here today, the Chief Minister said that government officers have been directed to make public interactions a regular feature of their schedule. “This is to ensure that the grievances of people at all levels are heard and necessary action taken for their redressal”, he said.

Underlying the importance of peace and tranquility in the process of development and economic welfare of the State, the Chief Minister said that tranquility is imperative to carry forward development agenda smoothly and complete the schemes in prescribed timeline. He expressed the hope that the normalcy will completely be restored and asked the people to play their important role in this direction for the larger interests of the people of the State.

In a six hour long marathon interaction session the Chief Minister heard the deputations and individuals patiently and assured sympathetic consideration for their genuine demands. The Advisor to the Chief Minister, Mubarak Gul and National Conference Provincial President, Ali Mohammad Dar were present on the occasion.

A deputation from Kokernag led by G. N. Adgami lauded the determination of the Chief Minister to help resolve the political and economic issues confronting . The deputation raised the issue of maize blight in the area causing damage to the standing crops and requested for relief in this connection. It also demanded construction of receiving station and upgradation of health facilities in the area.

The deputation from Homshalibugh headed by Abdul Majid Bhat, requested for separate Tehsil for Yaripora. It also demanded employment package in the area for backward and poor people.  The deputation requested for posting adequate medical and para-medical staff in the , Yaripora and construction of building for .

The deputation from Budgam led by M. S. Shaheen among other things demanded construction of roads under Doodpathri Development Programme. It also demanded early construction of Sukhnag Power Station and creation of infrastructure in health sector at Zanigam under NHRM. It also requested for employment opportunities for the youth especially belonging to poorer sections and residents of far-off and backward areas.

A deputation from Shopian led by Shabir Ahmad Kullary raised the issues pertaining to the upgradation of PHE and power development in the area. It laid stress on the launch of new water supply schemes in Keller and other kandi areas. The deputation also requested for fast tracking construction of bridge at Rambiara on and a new bridge at Vishaw Nallah to connect Shopian with Noorabad. It also emphasized for polytechnic and mini-secretariat in Shopian.

A deputation from Tral led by Mohammad Ashraf in its memorandum called for accelerating the pace of work on various schemes and a special employment package for the youth of the area.

A deputation from Pahalagam led by MLC Altaf Ahmad Kaloo requested for review of Pahalgam Master Plan and early clarification of cases for construction of residential houses under Building Operation Control Authority (BOCA). The deputation also called for preserving water resources and launching Ledder nallah beautification plan on the pattern of Jehlum beautification scheme under implementation in . It also raised the issues of flood protection besides demanding a degree college for Pahalgam.

The deputation of Chadoora led by Mohammad Maqbool demanded a bridge at Soitaing and also emphasized for enhancing employment opportunities for youth. It also raised issues of upgrading basic amenities in the area.

A deputation from led by Mohammad Amin and G. M. Dar requested the Chief Minister for mechamadization in various areas and upgradation of roads and power distribution system. It also demanded street lights in various areas and highlighted the urgent need for providing job opportunities to the youth especially belonging to the poorer families.

The deputations from Baramulla, Anantnag and other areas also raised similar issues and requested for employment opportunities to the youth. The individuals presented the representations covering wide ranging requests.