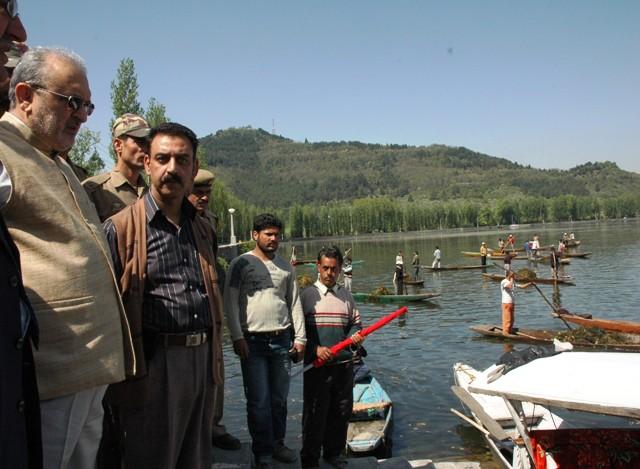 , April 25   – Continuing with its efforts to restore grandeur and originality of the world famous , the and Waterways Development Authority (LAWDA) has launched a massive manual de-weeding of the lake alongside mechanical process with increased number of labourers.

Highlighting the significance of the traditional de-weeding operation of the Dal and , the Divisional Commissioner said that restoring the pristine glory of the Dal is a top priority with the present government. He said, the Dal is our heritage which we have to preserve for our posterity. He called for coordinated efforts by all of us to keep the Dal free from pollution and extending cooperation to LAWDA in preserving and conserving the water treasure in the state which is an attraction for tourists all over the world.

Vice chairman, LAWDA said that de-weeding of the Dal and Nigeen lakes is being undertaken annually but this year more labourers are being engaged for the operation. He said 600 labourers are at work today while from tomorrow 1000 labourers would be engaged for the operation. He said the spring de-weeding operation would continue upto August while the Autumn operation would be started in November this year. He said during last year weeds on water expanse of 76000 cubic meters were extracted both manually and mechanically adding that this year more weed extraction is expected with increased number of labourers. He said during March this year duck weed was also removed from the lake. He said conducting manual operation of the Dal not only helps in restoring its pristine glory but also is a source of employment for Dal dwellers.

Highlighting the importance of manual de-weeding operation, the Vice-Chairman, maintained that this process is free from hazards as only unwanted weed are being removed from the water body.