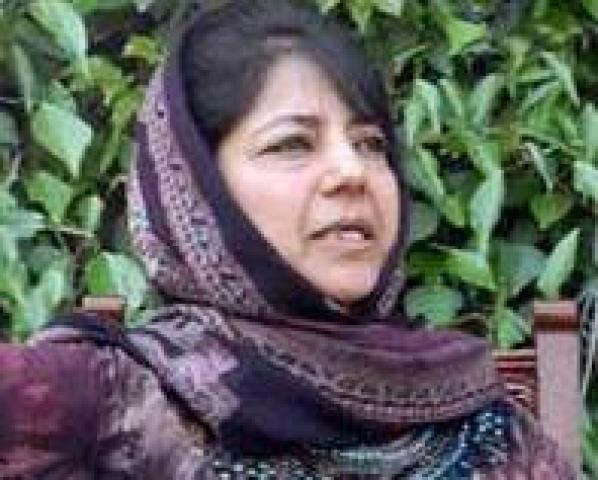 Srinagar Sept 7 (Vijay Kumar) – Peoples Democratic Party president Mehbooba Mufti said the Jammu and Kashmir state government was indulging in double speak on all matters of concern for the common man. It had been unable to push forward the legislation on the inter district recruitment even though it had promised so although majority of members would have supported it, but Mehbooba said instead of protecting the interests of people government opted for protecting itself as has always been the preference of National Conference.

She was addressing workers convention of her party in the border district headquarters of Kupwara on Monday.She said the government turned a blind eye to the protests particularly from Kupwara and shelved the legislation even after it had been approved by the joint select committee.

wait till an unspecified date in future, Peoples Democratic Party president Mehbooba Mufti has described the government stance as being against the interests of normalcy in the state.

Mehbooba said the situation in the state is now almost normal except for incidents triggered by government and the security forces, people having reposed a renewed trust in democratic system which needs to be responded to with matching trust from the state. She said it is the people who are the best guarantors of peace and security and government forces are only expected to create an enabling environment for the civil society to operate freely and added, “The men in uniform after having completed their duty in civilian areas will have to go back to barracks like any disciplined force and the time for that is now”.

The government, Mehbooba said is now using political dissent which is the essence of democracy as an alibi for continuing with overwhelming militarization of the state. This coupled with indiscriminate invocation of laws like the AFPSA and PSA could only breed cynicism once again that was primarily responsible for the trouble in she said.