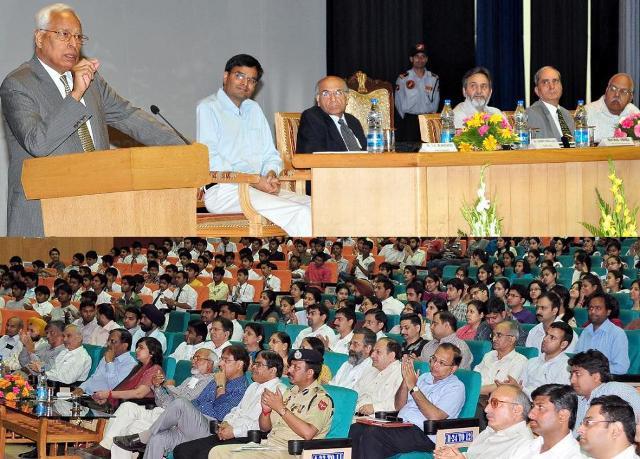 Jammu,April 24 (Scoop News) – The Governor,  N. N. Vohra, today emphasized the need for effective application of scientific knowledge and technological innovations for securing the welfare and economic prosperity of the people at large. He also stressed the importance of utilization of outer space for achieving peaceful and developmental goals.

The Governor, as Chief Guest, was addressing the inaugural session of the 2-day National Seminar on “Aviation and Outer Space: Science, Economics and Law for Sustainable Development”, organized by the newly established School of Innovation and Community Development of the Shri Mata Vaishno Devi University (SMVDU) at Kakriyal.

The Governor observed that scientific knowledge and technological advancement must be used to promote poverty alleviation as also for bringing progressive improvement in the cost and efficiency levels of varied delivery systems for securing speedy socio-economic development.

Referring to the theme of the Seminar, the Governor said that innovations must be used and applied for securing developmental goals.

Dwelling on the progress achieved in the exploration of outer space, the Governor said that the potential of utilization of space for peaceful purposes is unlimited and the scientists need to focus more on this aspect rather than on military objectives. In this connection, he said that space platforms and satellites have made crucial contribution to the collection of data to forecast weather patterns, floods, droughts, tsunamis and other calamities, promotion of education and development objectives, better management of natural resources etc.

On economic aspects of space, the Governor said that there has been tremendous growth in the communication and civil aviation sectors during the past about half a century, which has, in turn, not only brought distant lands closer but also given a significant boost to tourism and trade. Citing the example of helicopter service being operated to the Holy Cave Shrine of Shri Mata Vaishno Deviji, he said that besides facilitating women, children and elderly pilgrims, the facility is a boon to those who have limited time within which they require to complete the pilgrimage.

The Governor said that the concept of law in relation to space, a relatively more recent phenomenon, is now assuming centrality in view of more and more countries becoming stakeholders in outer space activities.

The Governor, who is the Chancellor of the University, congratulated the varsity for organizing this National Seminar on an important topic. He added that the varsity has established its credentials within a short span of time and the students passing out from this institution of higher learning are making outstanding contributions in varied fields.

The Governor presented the Chancellor’s Rolling Trophy for Resurgence-2011 to the SMVDU on the occasion. This Inter-University Cultural and Sports Competition, titled Resurgence, is organized by the SMVDU every year.

Earlier, the Governor lit the ceremonial lamp to mark the commencement of the Seminar and wished the participants fruitful deliberations.

The Vice Chancellor, SMVDU, Prof. R. N. K. Bamezai, speaking on the occasion said that this is the first such seminar being organized in the State. He gave details of the achievements of the University in varied fields and its future Action Plan. He presented a memento to the Governor on the occasion.

The Director, and Community Development, Dr. S. K. Wanchoo, in his welcome address, threw light on the aims and objects of organizing the Seminar.

Ms. Sakshi Arora presented a Vote of Thanks.

The Seminar will be spread over four working sessions during which 13 presentations will be made on the varied subjects.

Prominent among those present on the occasion were Principal Secretary to the Governor and Chief Executive Officer of the Shri Mata Vaishno Devi Shrine Board,  R. K. Goyal, Dr. Sanat Kaul, Prof. B. C. Nirmal, Air Marshal (Retd) Kapil Kak, a galaxy of experts, Directors of various Schools of the University, Heads of Departments, Faculty members and students.