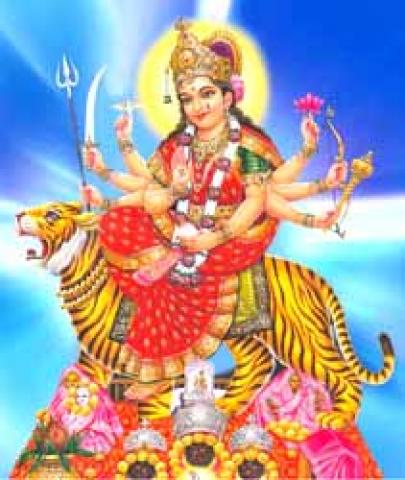 Srinagar/Jammu, Ocotober 8 (Scoop News) – The Governor, N. N. Vohra, Chief Minister Omar Abdulla have greeted the people on the commencement of holy Navratras and prayed for communal harmony, brotherhood, peace, progress and prosperity in the State.

In a message of felicitations, the Governor NN Vora said that the Navratras have a special significance in , as the holy Shrine of Shri Mata Vaishno Deviji witnesses a huge arrival of pilgrims during this period.

Chief Minister,Omar Abdullah has greeted the people on Navratra festival, wishing their welfare, peace and progress in the state.
In a message, issued on the eve of Navratra, Chief Minister expressed the hope that Navratra will be harbinger for new era of lasting peace, development and prosperity of the state.

Meanwhile, the Governor, who is also the Chairman of the Shri Mata Vaishno Devi Shrine Board, reviewed the arrangements for the Navratras at a meeting with the Chief Executive Officer of the Board, R. K. Goyal, here today.

Goyal stated that the traditional 9 day long Chhat Chandi Yagya is being organised at the Holy Cave Shrine of Shri Mata Vaishno Deviji during the Navratras commencing from tomorrow in which a group of about 30 Pujaris led by Prof. Vishwa Murthi Shastri will participate. He disclosed that the Governor is scheduled to visit the Holy Shrine on the conclusion of the Navratra. He added that the Bhawan area has been specially decorated for the occasion and special Navratra food would be served at the catering outlets of the Shrine Board. Besides, the Board has, for the past nearly two months now, undertaken large scale repairs and renovation of various installations in the Shrine area.
The CEO said that the commencement of the Navratras is also marked by the beginning of a 9-day long Navratra Festival at Katra, the base camp of Shri Mata Vaishno Devi Shrine, which is being organized in partnership with the Department of Tourism, to showcase the glorious traditions of the State. The main features of this Festival include the conduct of Shobha Yatras, an All India Devotional Songs Competition, wrestling competitions, cultural programmes and religious discourses.

It may be mentioned here,Navratri, the festival of Hindus, lasts for 9 days with three days each devoted to worship of Ma Durga, the Goddess of Valor, Ma Lakshmi, the Goddess of Wealth and Ma Saraswati, the Goddess of Knowledge. During the nine days of Navratari, feasting and fasting take precedence over all normal daily activities amongst the Hindus. Evenings give rise to the religious dances in order to worhip Goddess Durga Maa.

‘Nav’ means ‘nine’ and ‘ratri’ means ‘night’. Thus, ‘Navratri’ means ‘nine nights’. There are many legends attached to the conception of Navratri like all Indian festivals. All of them are related to Goddess Shakti (Hindu Mother Goddess) and her various forms. It is one of the most celebrated festivals of Hindu calendar.

In some communities, people undergo rigorous fasts during this season that lasts for the nine days of Navratri. The festival culminates on Mahanavami. On this day, Kanya Puja is performed. Nine young girls representing the nine forms of Goddess Durga are worshiped. Their feet are washed as a mark of respect for the Goddess and then they are offered new clothes as gifts by the worshiper.