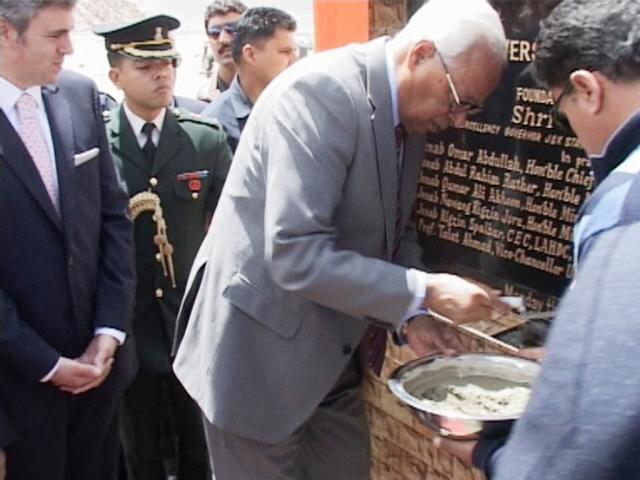 Leh(Ladakh),June 18 (Scoop News) –Stressing the importance of accessibility to higher education,  N. N. Vohra, Governor, and  Omar Abdullah, Chief Minister, said that the establishment of a Kashmir University Campus in Leh district would enable students living in difficult areas an opportunity to pursue courses of higher education and learning.

Addressing after laying the foundation stone of Leh Campus of the at Taruthang near here today, the Governor and the Chief Minister said that introduction of courses which have current and future relevance and ready marketability should receive priority so that students passing out from the higher educational institutions are gainfully engaged within the State.

The Governor, who is Chancellor of the University, while laying the Foundation Stone of the Campus, in a thought provoking speech dwelt in detail about various aspects relating to the development of higher education institutions and production of qualified human resource which can fruitfully serve the Ladakh region, the State and the country. He underlined the high potential of knowledge being transmitted through faculty exchanges, tele-conferencing and use of internet facility.

The Governor asked the University to consider a scheme for providing full scholarship to the meritorious students who commit to work as Teachers for specified periods after gaining qualifications at the University. He also suggested a survey being conducted to assess the needs and aspirations of students of this region so that the Campus could consider how best to made their expectations. He observed that the emergence of a University Campus in Leh district would relieve parents from incurring huge costs in sending their wards to distant towns to pursue higher education. He hoped that the challenge of providing a well qualified and experienced faculty and a good infrastructure would be adequately met by the University. He hoped that Leh Campus of would emerge as an unique centre of higher education.

In his speech, the Chief Minister said that the idea of establishing Kashmir University Campuses in Leh and Kargil was conceived in 2009 at a meeting of the Kashmir University Council chaired by the Governor. “We could have announced this important decision three years ago but did not do so as we wanted to first ensure the availability of land and the required funds to build the infrastructure. It has taken some time but the foundation of the Campus is being laid today only after we have tied up all ends”, he added and thanked the people of Taruthang for providing the required land for the University Campus.

Omar Abdullah referred to the State Government’s continuing efforts to provide equal opportunities to the students of all regions of the State to receive quality education at their doorsteps. He said that besides a chain of degree colleges established all across the State, the strengthening of the existing University Campuses and setting up new ones are important measures taken by the Government to ensure univesalisation of higher education.

Omar Abdullah said that the areas like Leh and Kargil where accessibility and winter hardships pose serious impediments in the educational system being run satisfactorily. In this context, the setting up of University Campuses in the Ladakh region assumes very high importance.

The Chief Minister, who is Pro-Chancellor of Kashmir University, expressed the hope that the Leh Campus would provide an opportunity to the students of the area to pursue higher education and prove their excellence.

The Chief Minister underlined the need for constructing the University infrastructure keeping in view the climatic and geographical conditions of the area. He also emphasized on factoring in the heritage and local architecture in the construction design. He also asked for effective utilization of the solar and wind energy resources for meeting the energy requirements of the Campus.

The Chief Minister called for making the Leh Campus a unique seat of knowledge and attract students from within and outside the country to study here. He said that introduction of subjects in the curriculum of the University should be based on survey to be conducted to ascertain the feasibility and viability of the subject.

A. R. Rather, Minister for Finance and Ladakh Affairs, speaking on the occasion said that the Campus would provide ample opportunity to the students to do post-graduation here without moving to different parts of the country. He said that the challenge before the University is to build the infrastructure and provide faculties within the targeted time frame.

Nawang Rigzin Jora, Minister for Tourism and Culture, thanked the Governor and the Chief Minister for their keen interest in the development of Ladakh region. He made special reference to the opening of University Campus in Leh and said that the cherished desire of the people of the area has been fulfilled.

Qamar Ali Akhoon, Minister for Consumer Affairs and Public Distribution, in his speech, gave a resume of the development measures the coalition Government has taken for the development of Leh and Kargil districts.

Rigzin Spalbar, Chief Executive Councillor, Ladakh Autonomous Hill Development Council, Leh, welcomed the Governor and the Chief Minister and described the occasion as historic for the people of Ladakh.

Earlier, in his welcome address, Prof. Talat Ahmad, Vice Chancellor, , gave details of the various initiatives being taken for the development of the satellite Campuses of the University and the infrastructure to be built at the Leh Campus to begin with. He said that The Campus will be spread over an area of 819 kanals of land. The process for finalizing the conceptual drawings and Master Plans has commenced and the construction work on this Campus would commence shortly. He said that the University Grants Commission has sanctioned over Rs. 27.39 crore for the various development projects of the Leh Campus, which include construction of Administrative Block, Social Science and Science Blocks, Hostel, Residential Quarters, construction of roads, external electrification, water supply and chain link fencing. Of this sanctioned amount, more than Rs. 13.69 crore have already been released.

Prof. Syed Fayyaz Ahmad, Registrar, , presented a Vote of Thanks.