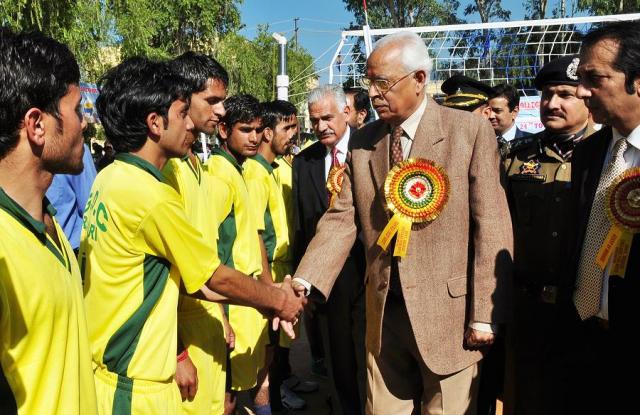 Udhampur/Jammu, November 24 (Scoop News) –The Governor,  N. N. Vohra, today emphasized the need for establishing the required infrastructure to promote sports activities in Jammu and Kashmir for the optimal development of the very high sports potential among the youth of the State. This, he observed, would considerably enhance the capabilities of our sportspersons to excel in the various national and international level sports events.

The Governor, as Chief Guest, was addressing the inaugural function of the week-long Inter-Collegiate Volleyball Tournament, organized by the (Boys), Udhampur, as part of its Golden Jubilee Celebrations. In all, 32 boys volleyball teams from the various colleges of Jammu Division are participating in this event.

Referring to the Golden Jubilee Celebrations of the College, the Governor observed that this is an important milestone in the evolution of an institution. He added that during the past five decades this College has produced many well-known personalities, who have made a mark in the varied fields of life and in this context referred to Prof. R. N. K. Bamezai, Vice Chancellor, Shri Mata Vaishno Devi University, an alumni of this College.

The Governor released the College Newsletter, ‘Devika’, on this occasion and declared the Tournament open. Underscoring the need of the College to have an all-weather indoor Volleyball court which could be used throughout the day, in all weather, the Governor announced financial support of Rs. 4 lakh from the Shri Mata Vaishno Devi Shrine Board.

Earlier, the players were introduced to the Governor before the commencement of the match. He released balloons and pigeons on the occasion, considered to be the symbol of peace, good luck and well-being. He witnessed the inaugural volleyball match played between the teams of , Udhampur and , Rajouri. This was preceded by the March Past and Taking of Oath by the players.

The Principal of the College, Dr. Nutan Kumar Resutra, in his welcome address, gave details of the achievements of this institution in the academic and sports activities, besides dwelling on its contribution in promotion of education during the past 50 years.

The Principal presented to the Governor a cheque of Rs. 50,000 as relief for the Leh flood-hit people. This amount has been raised by the students and staff of the College through donations.

The Tournament Torch was carried by a veteran sports person of Udhampur,  Raj Guru. A spectacular band display was the other attraction of the event.