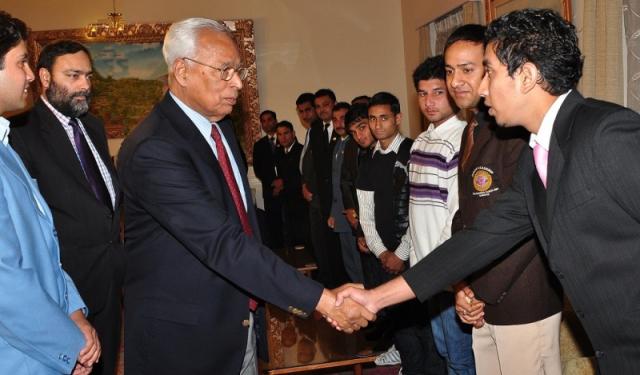 Jammu, March 2 (Scoop News) – The Governor,  N. N. Vohra, honoured the Fencing and Cricket Teams players of the Jammu University for their outstanding performances, consecutively for the last two years, at a function held at Raj Bhavan here this evening

The Governor congratulated the Jammu University Fencing Team for winning the All India Inter-University Fencing Championship in Men’s section, held at last year and earlier at in 2009. He lauded the Jammu University Non-Teaching Employees Cricket Team for lifting the All India Vice Chancellors’ T-20 Cricket Cup during the session 2008-9 held at Mumbai and retaining the Championship in 2009-10 held at last year.

While interacting with the players, the Governor, who is the Chancellor of the University, observed that efforts need to be made to set up teams in various sports disciplines by selecting players from all the as well as the colleges for ensuring competitiveness at the national level championships.

The Governor presented gifts to the players of both the teams and wished them many more wins in the future sports events.

Earlier, the Vice Chancellor, , Prof. Varun Sahni, introduced the fencers and cricketers of the University to the Governor.

The Principal Secretary to the Governor,  R. K. Goyal, and the Director of Sports and Physical Education, , Prof. Dhian Singh Bhau, were present on the occasion.