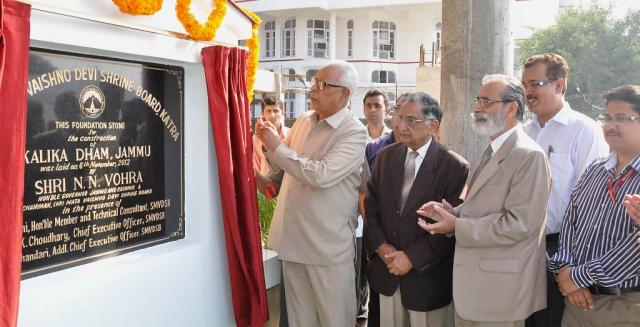 In a departure from the traditional practice, the Governor agreed to lay the foundation stone only when the construction had achieved visible progress on the ground. He laid this pre-condition for the brief reason that, on many occasions, there is a prolonged delay between such ritualistic ceremonies and the actual commencement of work on the ground.

Shri H. L. Maini, Shrine Board Member, who has been the Board’s Technical Consultant for many years, briefed the Governor about the pace of implementation of this prestigious project. He informed the Governor that the required manpower and the assessed quantities of the total materials required for the project had been timely mobilized to complete the project in record period. After reviewing the time frame of this project, the Governor directed the Chief Executive Officer,  Navin K. Choudhary, and the Engineering Wing of the Shrine Board to make every effort to complete this important project within a year, by around November, 2013. The completion of Kalika Dham will complete the troika of three major accommodation complexes in – Vaishnavi Dham, Kalika Dham and Saraswati Dham.

After the Foundation Stone laying Ceremony the Chairman of the Shrine Board reviewed with  Maini the to-date status in respect of all the major projects which are under construction at Katra and along the tracks to the Bhawan, including the establishment of an emergency helipad and a dedicated mule track. These major projects, including the Kalika Dham, are being constructed by the Shrine Board at a cost of more than Rs. 150 crore.

Giving details of the project, the Chief Executive Officer informed that Kalika Dham will cost about Rs. 14.80 crores and will have all the amenities and facilities required to be provided to the Yatris, including moderately priced accommodation and a Bhojanalaya.

Later, the Governor accompanied by Dr. Bloeria, Shri Maini and Shri Choudhary visited Vaishnavi Dham and reviewed the ongoing renovation and upgradation work being undertaken in this complex. He also reviewed the progress of other significant projects being undertaken at Katra and enroute Bhawan.