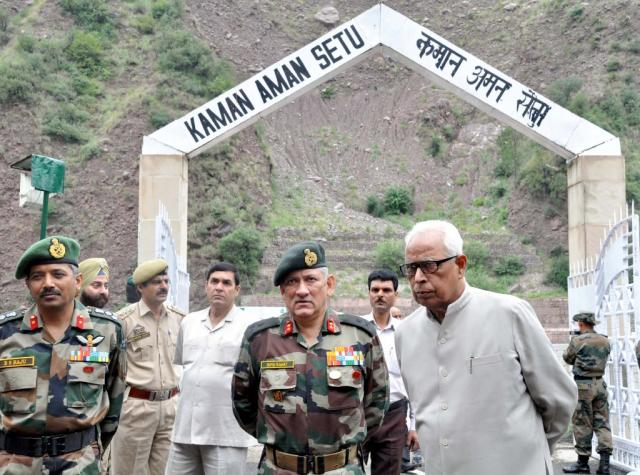 Srinagar, August 26 (Scoop News) – N. N. Vohra, Governor, on the second day of his visit to the frontier areas of Baramulla District today visited Kaman Aman Setu the point at which the passengers to Muzaffarabad and the trans-LoC trade load carriers cross over to POK.

On arrival at the Kaman Aman Setu, the Governor was received by Maj. Gen. Bipin Rawat, GOC 19 Infantry Division, Brig. B. S. Raju, Brigade Commander of 12 Infantry Brigade, and other Army officers.

The First Lady, Mrs. Usha Vohra, accompanied the Governor during the visit.

The GOC 19 Infantry Division and Brig. Raju briefed the Governor about the security situation in the Uri Sector and beyond.

The Governor interacted with the officers and jawans and had tea with them. He lauded the officers and men of the Indian Army for guarding the frontiers of the country in challenging conditions, far away from their homes, adding that the entire nation is proud of their devotion and commitment.