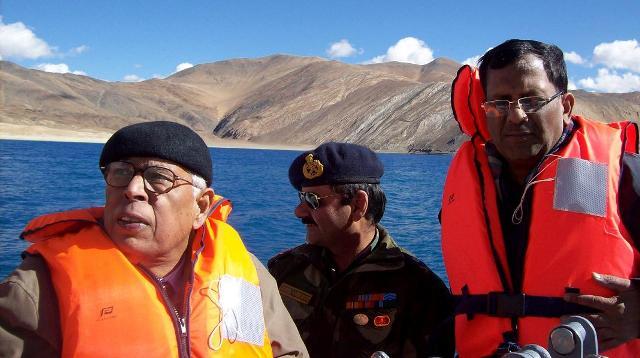 Leh (Ladakh), September 13, (Vijay Kumar) –The Governor of Jammu and Kashmir, N. N. Vohra, on the third day of his five-day visit to Ladakh region,today visited the Pangong Lake, situated at an elevation of 14,000 feet in the eastern sector of Ladakh, at a distance of 154 km from Leh. The Governor was presented the Guard-of-Honour by a contingent of the Army. Along with the senior Commanders deployed in this area, the Governor viewed the expanse of the lake, in a motor boat, for about half an hour. One of the largest lakes in the country, the other end of Pangong is held by the Chinese Army with whom the Indian Army officers hold periodic meetings.

The Governor was accompanied by the Chief of Staff, 14 Corps, Maj. Gen. R. K. Yadav, and the Principal Secretary to the Governor,  Raj Kumar Goyal.

The Governor visited 114 Brigade, where he was briefed by the GOC, 3 Inf. Div, Maj. Gen. Anil Oberoi and the Brigade Commander, Brig. Somnath Jha about their sector.The Governor addressed the troops and had tea with them. He had a special word of appreciation for the high devotion with which the officers and men were guarding the frontiers of the country, in difficult and hostile climatic conditions.The Governor also had an aerial reconnaissance of various formations under 114 Brigade.

The Governor, N. N. Vohra, who was the Chief Guest on the occasion, gave away prizes to the winning and the runner-up teams, as well as individual prizes to the players of both the teams.