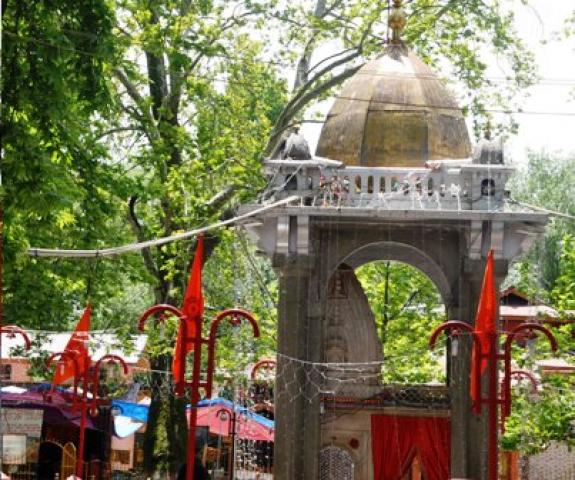 ,May 28, (Scoop News) – N. N. Vohra, Governor, has felicitated the people on the eve of Khirbhawani Mela and prayed for sustained peace, amity, progress and prosperity in the State.

In his message of greetings, the Governor observed that the Festival is a shining example of communal harmony and brotherhood, which are the hallmark of the glorious pluralistic ethos of for centuries past.

The Governor, on this occasion, prayed for the well-being of the people of the State.

In his felicitation message, the Chief Minister wished people well-being and prayed for peace and development of the State.

In a message, the Minister while highlighting age-old concept of Kashmiriyat said that the festivals which forms one of the most celebrated religious festivals of Kashmir Pandits depicts religious harmony and brotherhood wherein the Muslims also play an active role.

He said that Kashmiri Pandits form an important part of the Kashmiri ethos and hoped that the day is not far off when they would return to valley with honour and dignity.

The Minister for Finance and Ladakh Affair,  Abdul Rahim Rather has felicitated the people of the state especially Kashmiri pandit brethern on the auspicious occasion of Mela Khir Bhawani .

In his message,  Rather said the festival is the hall mark of our rich cultural ethos depicting centuries old tradition of religious harmony and brother hood. He said Kashmiri pandits are an important segment of ethos without which the very concept of Kashmiri yet is in complete. He hoped that with the dawn of peace in the state, the Kashmiri pandit migrants would return to the valley, with honour and dignity.

Rather also hoped that the auspicious occasion of Khir Bhawani Mela would prove a harbinger for peace and presently of the state.

In his message,  Tarigami said that the occasion reflects rich tradition of communal harmony and brotherhood, which stood test of times even during the odious phase of turmoil in the State. “In fact Kashmiri Pandits are ‘Jugular Vein’ of secular fabrics of Kashmiri culture and ethos”,  Tarigami said while hoping that the occasion of Mela Khir Bhawani would usher in a new era of peace, prosperity and brotherhood in the State.