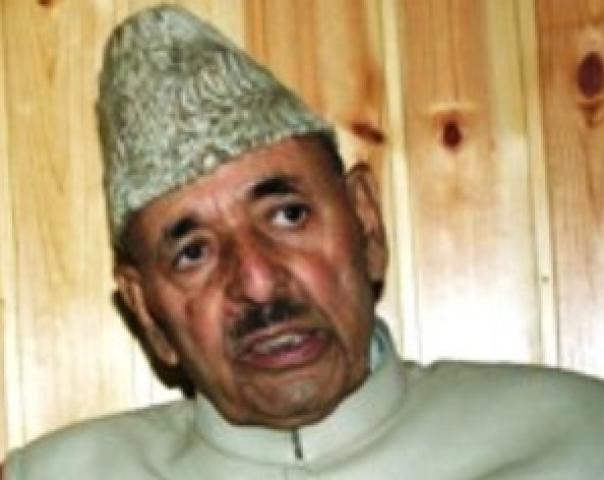 JK Governor, N. N. Vohra ,Chief Minister, Omar Abdullah ,  Ministers  and PDP Leaders condole demise of of former Minister and MLA Abdul Aziz Zargar who died last at his residence today after prolonged illness. He hails from Manzgam of in south . He is survived by his wife, four sons and three daughters

Zargar was a member of the constituent Assembly of in 1951 and served as Agriculture Minister in the Mir Qasim government in 1972.

Later, he held the same portfolio in the PDP-Congress coalition government from 2002 to 2008.

N. N. Vohra, Governor, has condoled the sad demise of  Abdul Aziz Zargar, former Minister, who had also served as a Member of the Constituent Assembly of Jammu and .

The Governor expressed his sympathy with the bereaved family and prayed for eternal peace to the departed soul.

The Chief Minister Tuesday morning visited the residence of late  Zargar at Bathandi to personally convey his sympathy to the bereaved family. He also prayed for peace to the departed soul.

Chairman Jammu and Kashmir Legislative Council,  Amrit Malhotra has expressed grief and sorrow over the   demise of former Minister and MLA  Abdul Aziz Zargar who passed away here this morning after a brief illness.

Malhotra said that late leader was man of principles, who during his entire life, fought for improving the socio-economic condition of the people of State, especially living in far flung areas.

While expressing sympathies with the bereaved family, the Chairman prayed for eternal peace of the departed soul.

In his condolence message, the Deputy Speaker described   late Zargar as a veteran leader who always worked for the welfare of the people of the State in general and Kulgam district in particular.

Madni conveyed his sympathy to the bereaved family and also prayed for peace to the departed soul.

Highlighting the contribution of late leader towards the socio-economic development of the state, the Ministers said that during his political career spread over to six decades, Mr Aziz Zargar remained a frontline freedom fighter and later Secretary of first State Constituent Assembly. He was closely associated with Cooperative Movement in early 70 and worked a lot towards development of Rural economy, they said adding that his demise has created a vacuum in the social and political arena of the state, which will be difficult to fill.

The Ministers conveyed their heartfelt sympathies with the bereaved family and prayed for the eternal peace to the departed soul.

Peoples Democratic Party has expressed deep sorrow and grief over the sad demise of former minister and senior party leader Ab Aziz Zargar who breathed his last at  this morning after a brief illness.

In a condolence massage party patron Mufti Mohammed Sayeed and president Ms Mehbooba Mufti expressed grief over the sad demise of the senior leader. While expressing sympathies with the family of the late leader Mufti’s recalled his association with the politics and self less service which he rendered for the upliftment of the people perticulalry from his area.  The two leaders also prayed for eternal peace to the departed soul.

Meanwhile a condolence meet was held at party head quarters  in which senior leaders paid rich tributes to the late soul and recalled his services for strengthening of the party.