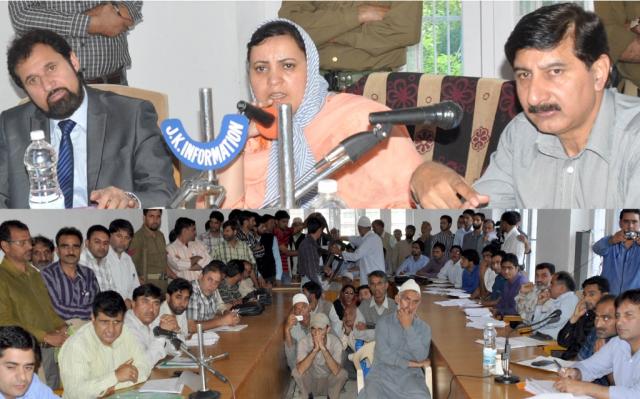 Kulgam/Srinagar, September 15 (Scoop News)-   JK She Minister for Social Welfare, Sakina Itoo, today said that the Omer led Government is committed to provide justice to the common people especially belonging to the BPL,SC,ST and living in the far flung areas at their doorsteps.

The Minister also addressed a public meeting at Noorabad.She said the main objective of holding  Awami Darbar in the area was to have feedback of the progress of various ongoing developmental projects and other problems of the people and their quick disposal. This also helps fine tuning of administration and also helps improving the basic services at the grass root level.
Later, the Minister visited Taileem-ul-Islam, Public School Asnoor, Noorabad, which is celebrating its Silver Jubilee on completion of 25 years.
She announced Rs.2 lakh from CDF for the upgradation of Computer Lab of the School. She also interacted with the teachers and students and asked them to work hard to achieve the goals of success in different fields. She said that Social Welfare Department was providing scholarships to the meritorious and deserving students to help the students to carry on their education. She said education is important for the development of society and asked the teachers to maintain high standards of the education as per the latest trends.
Earlier Sakina Itoo, held a grand Awami Darbar at Dhmhal Hanjipora in Kulgam.
District Development Commissioner, Kulgam,  Jehangir Mir, Director Rural Development,  Mohammad Alftaf Wani and other senior officers of police and civil administration were present in the Darbar.
The Minister impressed upon the officers to attend people’s problems in a time bound manner. She said The Government has empowered the Panchayati Raj Institutions (PRIs) and administration must work in close coordination with the elected representatives to ensure better delivery of various essential services on ground.  She directed for laying special tiles in the lanes of  Dhmhal Hanjipora for the facilities of locals.
During the interaction with the officers in the Darbar, Minister was informed that during the current financial year, under MGNERGA, 15964 job cards have been issued to the deserving beneficiaries in Noorabad, whileas Rs493.38 lakh have been expended on various developmental projects against the availability of Rs.575 lakhs. She was further informed that 854 works against a target of 1269 taken up in the area have been completed so far. It was also given out that during this period 64982 mandays have been generated while under IAY Rs.43.18 lakhs have been booked so far.
On the occasion, a large number of people, Panchs and Sarpanchs were present and apprised the Minister about some immediate problems being faced in the area. These included shortage of ration, supply of electricity etc.