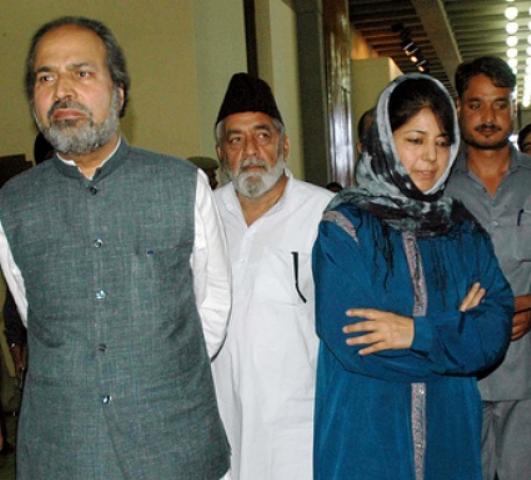 R S Pura/Jammu, May 21 (Scoop News) –Peoples Democratic Party (PDP) Mehbooba today regretted that the present government headed by National Conference (NC) has failed to solve the problems being faced by the farming community of the State.

Addressing a function to felicitate newly elected Sarpanches and Panches of R S Pura tehsil, Mehbooba Mufti lambasted the government for adopting lackluster approach towards the burning problems of the farmers.

Pointing towards the hardship being faced by the farming community, she shifted blamed on the state government for the non availability of water and worst ever power crises in the State.

She said that the successive NC regimes have brazenly bartered state’s natural resources for the lust of power. “After surrendering water of the State, the NC government has also handed over power projects through unfair agreements”, she said  and added that state has suffered huge losses due to the discriminatory and grossly unfair  agreements signed by the successive NC regimes with other agencies. PDP leader said that no State in the country would barter its resources in such a reckless manner as was done by the NC governments by handing over projects to other agencies.

She further pointed towards non availability of water in the canals especially in the tail ends due to failure of the government to properly conduct de-silting of the canals. She further regretted that despite repeated demands of the farmers, government has failed to provide seeds and fertilizers in time.

She assured that PDP would effectively take up their issues and force the government to minimize the hardship being faced by the farming community. She further assured the people that PDP was committed to the opening of Sailkote-Suchetgarh road as it was  top of party’s agenda to open all the traditional routes which were plagued due to the partition.

Pointing towards failure of the state government to get the annual plan finalized, PDP chief equipped that almost five months have already been passed but the government has yet to get the annual plan finalized which reflects non serious approach of the present regime as far as initiating developmental activities are concerned. “Due to this casual approach of the State Government developmental activities have come to halt and the backward and remotest areas are the worst suffering of such attitude of the government.

Speaking on the occasion, former Rajya Sabha member Trilok Singh Bajwa dubbed the present government as anti-farmer and pointed out during the last two and half year, woes of farming community has compounded. He strongly demanded that R S Pura, which is rice bowl of the State, be declared as Basmati Zone. He reminded the gathering about the revolutionary steps which were taken by the previous PDP-Congress regime especially for the farmers.