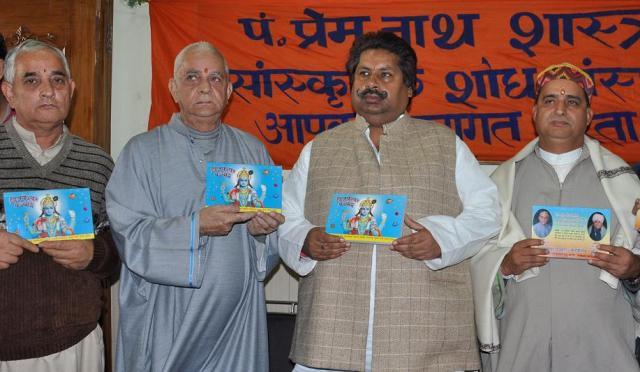 , December 13 (Scoop News) –   Minister for Revenue, Relief and Rehabilitation,  Raman Bhalla has said the people of Kashmir are eager to receive their migrant (KM) brethren, adding that both the communities of are famous for communal amity and religious tolerance. He said the government has also initiated various measures for rehabilitation of Kashmiri migrants in the valley.

This was stated by the Minister after releasing 327 volume of ‘Vijeshwar Panchang’-2011 written by Pandit Omakar Nath Shastri at a function held at Press Club in Jammu. Bhalla said the Government has constructed residential quarters for proper rehabilitation of the migrants at Sheikhpora, Budgam, Mattan, Anantnag, Veesu, Qazigund and Hall in Pulwama district. He said the residential quarters at other would places also be developed on modern lines by providing all infrastructural facilities to the migrants.

He said that instructions were issued to the concerned authorities that these appointed youth should be posted keeping in view the entire situation for their convenience. He said that 628 Pandit youth would be posted in Anantnag, 164 in , 175 in Baramulla, 201 in Kupwara, 135 in Pulwama, 111 in Budgam, 93 in Shopain, 38 in Ganderbal, 9 in Bandipora and 141 in Kulgam districts.

Bhalla said that the people of have always upheld the traditions of communal amity and ideals of secularism, which have not changed despite turbulent times.

The Minister said due to persuasion of the coalition Government, the central Government has sanctioned Rs. 1618.41 crore package for proper rehabilitation of displaced families of valley. He said that Government also constructed pre-fabricated quarters accommodation for Pandit Migrants at Vessu in Anantnag district at a cost of 30 crore adding that the accommodation is meant for the employees selected under Prime Minister’s Employment Package, who are to be posted in twin districts of Anantnag and Kulgam. He said that accommodation would provide multi-purpose community hall, dispensary, fair price shop and boundary wall besides blacktopped link roads. He said that instructions were issued to concerned executing agency to complete the ongoing work within stipulated time frame. He apprised that finishing touch to as many as 140 quarters at Vessu is being given and will be handed over to the candidates by the end of this month. He was informed that the plinth work of 97 more quarters would be completed by next year.

Bhalla said that a separate block has been identified for accommodating female candidates in the venues. He said that the candidates selected in Baramulla and Kupwara district would be given accommodation at Baramulla in the first phase and in the second phase the quarters will be constructed at Kupwara. For and Budgam district, the quarters are being constructed at Sheikhpora.

The Minister said that 4218 flats for Kashmiri migrants being constructed at a cost of Rs 335 crore at Jagti in are nearing completion and the allotments would be made to the displaced families of valley by 2011. He said that the township will have all necessary facilities like roads, health centre, community hall, educational institution, old age home, common facilities centre, STP, Escalation, shopping complex, post office, bank besides facilities of sewerage, drainage, parks, drinking water and electricity, he added.

Speaking on the occasion, Pandit Omkar Nath Shastri who is the author of Panchang appealed to Muslim brethren for giving due respect and protection to migrant children who have joined in various departments in valley.

He mentioned that all leaders of the valley from all sections have been telling that Kashmiri Pandits are part of their society and ultimately they have settled again in valley and time has come for such leaders to convert such statements into reality by welcoming the children of Kashmiri Pandits and extend full support to them so that they re-settle in valley.