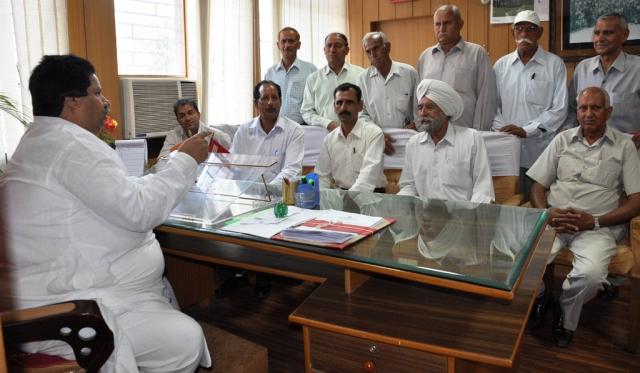 Jammu, April 18 (Scoop News) –    JK Minister for Revenue, Relief and Rehabilitation,  Raman Bhalla has said that the Government has submitted a proposal of Rs. 1775 crore to Central Government to facilitate  one time settlement for Pak/POK refugees of 1947, 1965 and 1971.

This was stated by the Minister, while interacting with a deputation of Chhmab refugees of 1965, here today.

Bhalla said that the Government has already regularized 16-camp and of Samba district adding that left out would be regularized soon after reconciliation of revenue documents. He informed that most of colonies of refugees are also being regularized under 254-C Revenue Act at Kathua and adding that the areas would be developed on modern lines by providing all basic amenities like safe drinking water, road connectivity, electricity, health, education besides better lanes and drains at par with urban pockets.

The Minister said for improving the socio-economic condition of the DPs, the Centre Government has approved Rs 49 crore packages for distribution among them as   land deficiency compensation adding that out of which Rs 32 crore has already been distributed by arranging public darbars in their respective basties.

For facilitating the displaced families,  Bhalla said the Government has enhanced compensation from Rs. 25000 to Rs. 1.50 lakh. He asked the left out families to approach the revenue officers for land deficiency compensation.

The President Chhamb Displaced Persons Association,  Ch. Partap Singh, apprised the Minister that out of 8100 families who were displaced during 1965 Indo Pak War,   3500 families were resettled in two districts of  and Kathua in 27 basties. He said 5 Basties were settled in Hiranagar and 22 in Samba, Bishnah, R S Pura and . The population of Chhamb Sector refugees was about 26000 at the time of 1965 war thereafter about 8000 population of consisting of about 3500 families were temporarily settled in 27 basties.

People of thirteen villages situated along the Cease Fire Line drawn by the United Nation between and in 1948. Forty-six villages were with Tensil Bhimber district Mirpur now in . He said that 46 villages were liberated from the army and kabilies by the Indian army with the strong support of Chhamb people, this is only one part which is left with India of Tehsil Bhimber. He said Chhamb sub-division comprising of 46 villages were included in tehsil Nowshera district Rajouri in 1948.

However, theses 46 villages were excluded from Nowshera tehsil and included tehsil Akhnoor in .