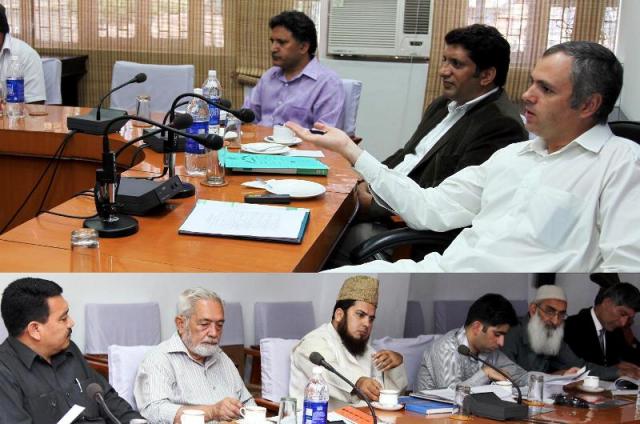 , June 24 (Scoop News) –J&K Chief Minister Omar Abdullah approved release of Rs. 2 crore for early completion of Haj House at Bemina in so that it is fully utilized for providing adequate facilities to the Hujaj.

Omar also asked the Haj Committee to provide cell phones to the Khudam-ul-Hujaj so that they are available to Hajis and communicate with them and the concerned Haj Officers. He also asked for finding out a mechanism of selecting Khudam-ul-Hujaj from all the districts to help ensure their proper service to the Hajis during Haj days.

The meeting was chaired by the Secretary Haj and Auqaf Ajaz Iqbal. MLC, Jehangir Hussain Mir proposed the name of Omar Abdullah for the Chairmanship while former Minister Haji Nisar Ali seconded the proposal.

Omar Abdullah is the first Chief Minister to be elected as the Chairman of Jammu and Kashmir State Haj Committee.

Omar Abdullah while chairing the first meeting of the State Haj Committee and took stock of its functioning and measures afoot to make befitting arrangements for the Haj 2010.

Various matters pertaining to the Haj arrangements and facilities to the Hujaj-i-Kiram were discussed in detail in the meeting.

Omar also directed for organizing training camps for Aazmeen Haj well before the month of Ramzan in all districts. “The necessary literature and booklets containing guidelines about performing Haj besides other instructions should be distributed among them in these training camps. The literature and instructions should be in simple Urdu language. Possibilities should also be explored to appraise the Aazmeen Haj about the necessary Haj education and guidelines through audio visual film capsules”, he said.

He said that he would also take up the matter of screening such audio visual films in the aero planes carrying Aazmeen Haj, with the Central Haj Committee and the Union Minister for Civil Aviation.