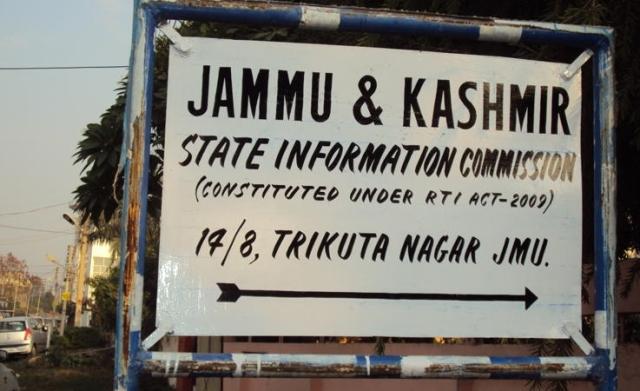 , December 23 (Scoop News) – In what might well be labeled as utter disregard for the taxpayers’ hard earned money, the state government has so far spent nearly 83 lakh rupees for the upkeep and functioning of the nearly defunct State Information Commission. This was revealed in response to an RTI enquiry made by J&K RTI Movement and Sangarsh activist Raman Sharma.

In his RTI application Raman Sharma had asked as many as 16 questions related to the expenditure incurred by the State Information Commission ever since it set up offices in and . Judging from the replies received it seems that the Commission has spent money on everything except on conducting awareness/training programmes.

According to J&K RTI Movement the J&K SIC was constituted on 19th October 2009 vide SRO 325, and IAS officer Gazzanfer Hussein was placed in charge as its first Secretary. Chief Central Information Commissioner Wajahat Habibullah was officially appointed the first Chief Information Commissioner of J&K by the Governor only days later on 23rdOctober vide SRO 334, but he was forced to withdraw 4 months later on 12thFebruary 2010 because PM Manmohan Singh and the then LOP-LK Advani could not agree upon his replacement.

Ten months on, the J&K State Information Commission remains headless and inoperative turning the whole process of up keep and maintenance into an exercise in futility.

J&K RTI Movement in a statement said that it has been 14 months since the J&K SIC was constituted.  During this period, the Commission established offices at the Old Assembly Complex in , and also rented space in Trikuta Nagar, .  Both offices have remained open, since it has been assumed that the 3-member SIC will follow the High Court pattern, wherein the Chief Information Commissioner follows the Darbar while one Commissioner remains in and the other Commissioner remains in .  The Commission also established its website (www.jksic.nic.in) through NIC, and has established modalities for videoconferencing with NIC facilities in the districts once it begins hearings.

During this long wait, however, expenses amounting to nearly 80 lakh rupees have been incurred.  In the fiscal year 2009-10, Rs. 21.29 lakhs were spent on salaries, while Rs. 53.62 lakhs were spent in the 2010-2011 fiscal year up until October. Since its founding, Rs. 2.16 lakhs have been spent on telephone and Internet bills, Rs. 2.50 lakhs for Darbar expenses, Rs. 2.53 lakhs for fuel, and a further Rs. 1.09 lakh on computers, stationary and other miscellaneous items.  Other expenses have been borne directly by the Estates Department and Motor Garages and are not included in these figures.  Overall, at least Rs. 83.19 lakhs has been spent, while the Information Commission has been forced to idle and the RTI users have been left with no recourse as their RTI applications have been ignored and some of them have faced threats and physical attacks. “It’s a shame. The absence of Information Commissioners makes it very difficult if not impossible to ensure a thorough implementation of the right to information. The J&K RTI act is a very strong law. It seeks to empower people by making the administration accountable to them. Unfortunately, the authorities haven’t displayed the required sincerity in bringing this about. The State Information Commission is presently defunct and the taxpayers’ money being spent in its upkeep is simply going down the drain”, Said Raman Sharma, the RTI campaigner. Whereas another RTI activist Ayaz Mugal remarked, “J&K SIC is an expensive column structure without walls and roof which is risky by all means."