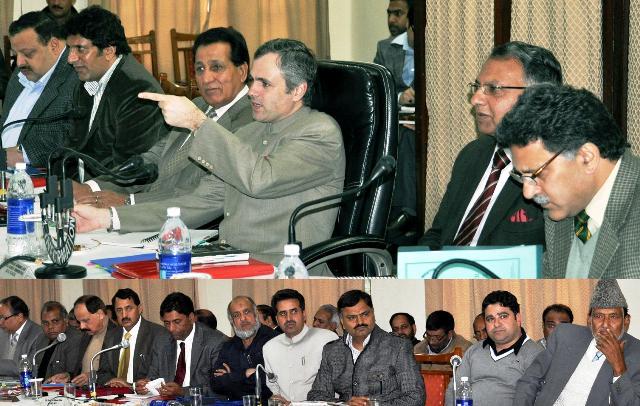 , February 10 (Scoop News) – J&K Chief Minister Mr Omar Abdullah today said that an Amendment Bill for constitution of Election Commission and Finance Commission for Panchayats will be introduced in the ensuing assembly session in consonance with 73rd amendment of Indian Constitution.

Chairing Board meetings of Rajouri and Poonch here today, Mr Omar said the government has decided to conduct the Panchayat polls on non- party basis. He said as per the spirit of 73rd constitutional amendment, the election commission will be established in the State for which a bill will be introduced to amend the State’s Panchayat Raj Act, 1989.

Similarly for setting up Finance Commission a Bill will be introduced to amend the Panchayat Raj Act 1989, he said adding that elected representatives at district level will also be empowered to ensure efficient monitoring of development schemes at the grass route level.

The Chief Minister directed the district administrations of the twin districts to gear up preparation for the Panchayat polls, which he said have to be completed by the end of May this year.

Poonch and Rajouri districts have registered 81 and 73 percent achievements respectively under District plans  by the end of January 2011. Against the total availability of Rs. 76.76 crores over Rs. 62.39 crores have been spent in Poonch district while expenditures made in Rajouri district accounts for Rs. 74.71 crores out of the total availability of Rs. 101.36 crores.

These details were presented to Chief Minister, Omar Abdullah at the separate review meetings of District Development Boards of these districts.

Laying stress on judicious spending of funds in consonance with the approved allocations, the Chief Minister underlined the importance of time line completion of targets to ensure benefits of development works to the people as per targets and the schedules.

Stating that the development of hilly, backward and remote areas is one of the priorities of his government, he said that various maga-projects in power and other sectors have been initiated in these areas to generate economic activities and achieve twin objectives of the welfare of these areas along with the holistic development of .

Flagging road communication as an important ingredient in the all round development and employment generation in hilly and backward areas, the Chief Minister said that his government is working out an ambitious programme with the central agencies to bore tunnels in various hilly areas for interconnecting districts and generating wide ranging commercial and economic activities. “This would not only help in fast tracking the development programmes but in creating employment opportunities to a large number of people”, he said responding to the demand put forth by B. A. Naz, Mushtaq Bukhari and other legislators of Poonch district regarding construction of Lornu-Tangmarg tunnel, a project presently with Border Roads Organization (BRO).

The Chief Minister said that he would take up the matter of construction of this tunnel with the BRO and at other relevant forums. “We have various other projects for construction of tunnels on anvil and their early launch would be persuaded at the Centre Government level positively.

“The Lornu-Tangmarg tunnel would help to link Poonch district with the Tangmarg through a 34 kilometre road, give new dimension to the economic welfare of far-flung areas, boost the tourism in these areas and encourage pilgrim tourism for Buda Amarnath” observed the legislators.

Omar Abdullah said that the construction of has shown positive results on various fronts. “The famous Shopian Ambri and other apple verities are being sold now at Rs. 15 to Rs. 20 a kg reportedly against Rs. 50 to Rs. 80 previous years. Similarly, the truck loads of vegetables and essential items from Shopian are transshipped to Poonch and Rajouri via Mughal road on cheaper rates”, he said adding that the completion of double lanning of this road would further enhance the commercial activities in the area to benefit the people on either sides.

The legislators appreciated the Chief Minister’s keen interest in the equitable the development of all the districts in the State and lauded him for his special attention and coordination for faster development of hilly and backward areas. “Your personal and regular monitoring of progress under district development plans depicts your keenness for ensuring holistic development in the State”, they said.

In their speeches they raised various issues pertaining to the development in their constituencies and demanded additional funds for completion of ongoing schemes.

The District Development Commissioners of Poonch and Rajouri in the separate PowerPoint presentations explained the status of development sector wise in their districts.

The Chief Minister sanctioned an additionality of Rs 4.19 crore for Poonch and Rs. 4.40 crore for Rajouri to ensure completion of all development works taken up under District Plan.

Filed under: Politics, World
Share Tweet Pin G Plus Email
previous article: Colourful Kodaikanal.
next article: While The Death Toll Due To Floods In Sri Lanka Is Increasing —Number Of Displaced People Decreas