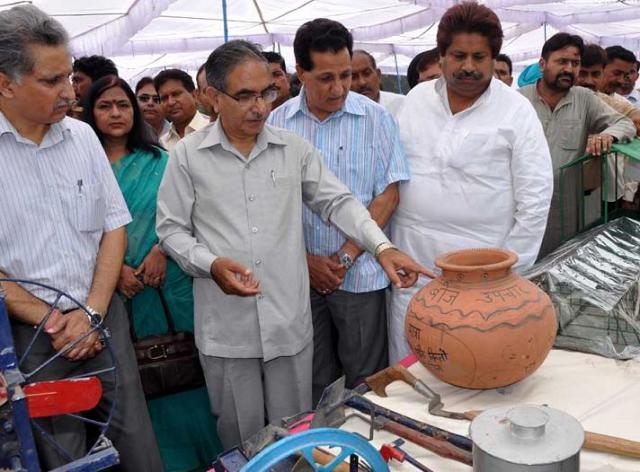 In his inaugural address,  Mir appreciated the role of the agriculture in ushering in prosperity among the farmers and announced the strengthening of ATMAs which was another milestone in rapid transfer of technology. He disclosed that 40 Kisan Mela cum Exhibitions are being organized in Jammu division at block level under the scheme during current rabi season  for sensitization and awareness of farmers at the grass roots level. He recalled the initiatives of the government for welfare of farmers which include the pre budget discussion with farmers, initiating Best Farmers Awards at Block, District and State level, farmers’ visit outside the State to institutions of excellence, technology demonstrations and interaction with farmers at block level, Kissan Goshthies, etc.

He said that the issue of facilitating export of basmati rice of R S Pura to outside country has been taken up at the Govt. of India level and hoped for early decision in the matter. He also announced that a Buyer–Seller meet shall be held by Agriculture Department soon on Basmati Rice. He asked the Department of Agriculture Jammu to furnish a detailed Project Report for Basmati Rice in a Mission Mode which should include the provision for “mandis” also. He also announced that a committee shall be framed soon to recommend measures for prevention of frequent fluctuations in the prices of agriculture produce. He advised the farmers to adopt the cluster approach for utilization of irrigation resources such as bore wells etc.

While welcoming the organization of  such events the Minister for Relief & Rehabilitation,  Raman Bhalla assured the farmers that Revenue Pass Books shall be issued to them within a couple of months.

The MLA’s and other speakers representing different sections of farming community made a strong case for revitalizing basmati rice sector and timely provision of seeds, fertilizers, subsidized machinery and other inputs. More than one thousand farmers from R.S.Pura block & even outside participated in the Kissan Mela who displayed more than 300 crop exhibits. The items which stole the show included the samples of Basmati rice which is nearing maturity, uniformly sized and shaped hybrid brinjal and maize, high value and heat tolerant milky mushrooms, vegetable seedlings for rabi season and superior kinds of vegetables.

Prizes were distributed for best exhibits among the farmers which included  Ganesh Kumar, s Manjeet Kour,  Mohinder Lal. Cultural items on agriculture based themes were also presented by local artists.

Director of Agriculture, ,  Ajay Khajuria while welcoming the chief guest highlighted the activities of Agriculture Department Jammu and explained various schemes for benefit of farmers.