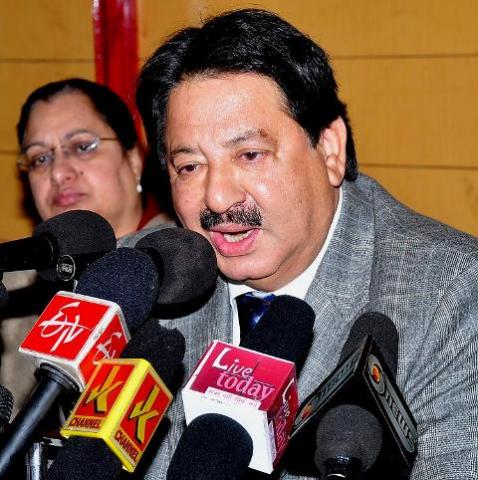 Jammu, January 11 (Scoop News) –Minister for Education,Peerzada Mohammad Sayed today announced  that in order to remove differentiation of uniform between private and government schools, education department has decided to provide special uniform codes, pants with ties and shirts to all the children studying in government schools and ensure their personality building through well qualified teachers who have already been engaged by the government for such schools so that we are also able to present our students in a magnificent manners.

Addressing a press conference in Jammu Peerzada said that the government also has introduced grading system in academic results so that students do not fall prey to demoralisation thus leading themselves to certain self-destrucive means.

He said that Rs 36 crore have been sanctioned for upgradation and renovation of existing schools while Rs 40 crore have been earmarked for opening of new educational institutions. He further added that subject wise teachers training is also being conducted in DIETs to ensure quality education to the students with enhanced excellence. He also expressed gratitude to the Centre for providing required funds to the State for improving education sector through various innovative programmes like SSA, RMSA etc.

Peerzada Sayed said “The decision of Government during disturbed turmoil conditions to ensure opening of schools and conducting timely examination without allowing to waste precious one academic year of the students has not only resulted into respectable examination outcomes but also defeated those nefarious and anti-social elements who were bent to bring education system The Minister said as compared to last year’s exam results there has been 3% increase in pass percentage this year swelling result to 65%. to grinding halt in the valley.”

Peerzada reminded the media persons his own press conference held in Srinagar where the Government took the stand of opening schools inspite of opposition from various quarters and today results are the indication of the fact that Government never allow to waste one precious year of the students. He said that the entire department of Education swung into action, staff cooperated and students attended their classes and exams in a most difficult and severe circumstances besides parents took serious risk in sending their wards to schools and these combined efforts have helped in protecting the academic carrier of our students.

He complimented Director Information & Public Relations, Khwaja Farooq Renzushah, Print and Electronic Media for launching most effective and well meaning campaign in favour of opening of schools and conducting examinations which was responded by the society at large.

Peerzada said that education is a continuous process and it is our determination to impart quality education without wasting any time as our children have to compete at national and international level. It was with the same intention that we decided to start winter schooling in valley which continued for 30 days. However, recent heavy snowfall constrained us to take a decision to close them temporarily but still the general public is demanding their reopening. The decision will be taken appropriately with improvement in the weather. He clarified that no special funds earmarked or received for heating system in the schools, it was out of local funds, that heating arrangements were made.

Peerzada while replying to a question said that Government has already issued orders to streamline the private tuition system so that they don’t charge exorbitant fees and keep effective infrastructure available without causing inconvenience to students. Deadline has been given to them for registration within the prescribed norms. He said no government teacher is allowed to teach in such private centres during official working time.