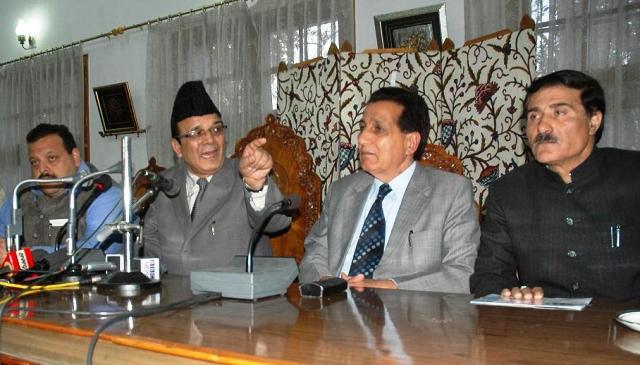 Srinagar October 23 (Vijay Kumar)-J&K  Finance Minister  Abdul Rahim Rather on Friday made it clear that all possible steps would be taken to protect the interests of general public and ensure the patient care in view of the adamant stand of a section of junior doctors to continue their strike.

In a jam packed press conference here today,he said that government will not hesitate in taking appropriate steps to ensure that at no stage, patient care in the hospitals is affected due to the on going strike.

Earlier,  Abdul Rahim Rather while apprising the media persons about the role of government in solving the crisis, said that the junior doctor of are on strike since October 5 and the doctors joined them on October 9. He said that there was no reason to strike because government had assured redressal by October 31.Without waiting for darbar move, the doctors proceeded on strike and created numerous problems and sufferings for the sick.

Referring to recent meetings held on October 21 and 22,  Rather said that the government assured the doctors that their genuine demands would be fulfilled within 8 days and thereafter there was no reason to continue strike. But after seeking more time for discussion among their ranks, the striking doctors today categorically stated that they will not withdraw their strike. Therefore, the government has no option but to take strict action against them under law.

Later, interacting with the media persons present in the press conference, Finance Minister said that Chief Minister  Omar Abdullah has constituted a high level committee to discuss the issue with the striking doctors and simultaneously the authorities including senior officers of Health, Finance, and Planning are already at job to mitigate the grievances of doctors.

Replying to another question regarding trust deficit,  Rather said that the doctors have already been given the corresponding grade in accordance to sixth pay commission recommendations. Now they are complaining of lesser grade already given to them before the implementation of sixth pay commission.

Referring to the action being taken by the government under given circumstances,  Rather said that all possible measures shall be taken in accordance with law and government has to discharge its constitutional responsibilities of protecting public health.

On the other hand the striking doctors also put up a brave front shiting,once again, the blame on the state government who according to them was indulging in mere lip service than taking concrete action to mitigate the sufferings of the common populace.

Addressing press persons here inJammu representatives ofthe Junior doctors association said , "for last 17 days we are requesting the state government to understand that they are not running after money and only needed a written assurance fromthe  state government that their demands would be fulfilled".

Instead of addressing the genuine concerns raised by the doctors fraternity the state government is bent upon confusing the basic demand of doctors by maintaining that their demands would bemet before hte durbar move and the strike was illegal. How can we trust the state government which has not bothered to address our basic demands for last couple of months only on verbal assurances.

"We are not adamant we are only demanding a written assurance to end the stalemate, spokesperson of the junior doctors association maintained.

While taking serious notice of the problems faced by the people in different Institutions of the Health Services due to strike by the Junior Doctors Associations of Jammu/Srinagar, the following action were taken by the Government:

a)The Doctors undergoing PG Course, who have been placed under suspension as per University Statutes relevant to the said course are as follows:

b) The following Assistant Surgeons were reverted back from Medical Education Deptt. to Health Deptt.

b)  The Registrars & Demonstrators who have been reverted back to Health  Deptt. are  as follows:-

The above orders will find immediate effect.