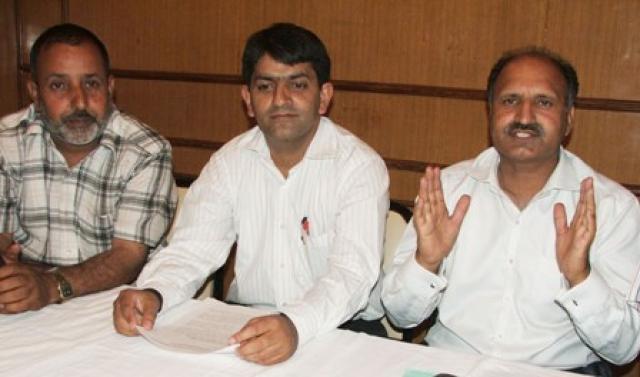 , April 10 (Scoop News) –J&K Tribal United Forum-an organization of Gujjars today said that they are going to challenge the new legislation in the court of law. Opposing strongly the bill passed by J&K Assembly yesterday to ban inter district recruitment for Scheduled tribe, The leaders of the Forum alleged that, the new law is against the basic and constitutional rights of tribals hence we have decided to move to court to seek justice for ST communities.

Addressing a Press Conference here , the leaders of Gujjar community appealed the Governor to reject the bill as the new legislation passed by the both houses is ,ill-conceived ,undemocratic ,unconstitutional and will badly effects on the constitutional guaranties  and rights of all reserve categories including STs.

Holding their leaders responsible for the inclusion of ST in the ban, Roshan Din Choudhary, State President of Jammu Kashmir Tribals United Forum, said that the two ST ministers and one MLA betrayed us and laid down the whole community , by supporting the bill to  include Schedule Tribes in the purview of ban in inter-district recruitment. They have deceived the community for which they have to pay the price, in shape of social boycott.

He further said that the unfortunate part is that neither the Govt. nor the Tribal in Cabinet have paid any heed to the plight of Gujjar-Bakerwal. He alleged that so called representatives of the tribal have ditched them at the cast of personal gain and political survival but they have to pay the price for this blunder.

Alleging a loss of 27500 posts to Schedule Tribe against a total of 275000 appointments, Roshan Choudhary also gave some figures of temporary appointment like 65000 Rehbr-E-Taleem, 70,000 Angawadi workers & helpers, 20000 on spot recruitment in JK Police, 35000 SPOs, 35000 dail wagers in PDD, 30000 in PHE, 20000 appointments on adhoc, contractual and stop gap arrangement have been done by the Govt. in last few years with no reservation of ST. He further showed his concern that Govt. has avoided the STs reservation in these temporary appointment by passing a bill for regularization of the contractual employees.

Zabeer Ahmed Bajjar, General Secretary, said that they are not against anybody or the leader until the interests of their community is protected and are ready for any sacrifice and can go to any extent to safeguard the community rights. He appealed the community members to join hands to start crusade against all those who sale out their rights in lieu of their personal interests.