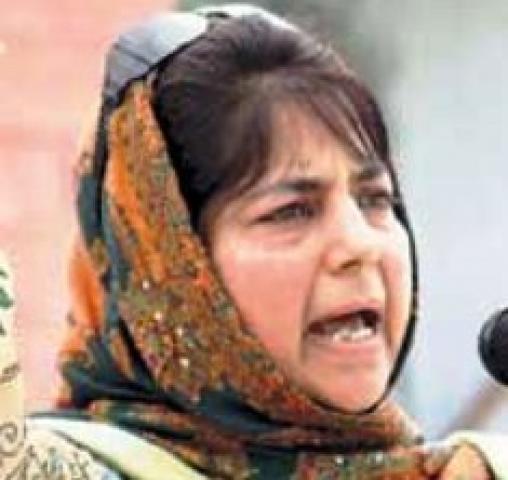 Srinagar, April 25 (Scoop News) –     Expressing her concern over rampant corruption in the State, Peoples Democratic Party (PDP) chief Mehbooba Mufti today regretted that the Jammu and Kashmir has become a centre of crime and corruption due to the  mis-goverance and mis-deeds of the present dispensation headed by the National Conference.

Addressing a press conference in today, PDP chief said “since formation of this regime there is no transparency and accountability in the administration because the present dispensation is not interested in strengthening such institutions which are helpful to curb corruption”.

She pointed out that the State Accountability Commission, which was constituted during the PDP-Congress regime to check corruption, has become defunct as government was not interested in making it functional. Furthermore the claims of government to setup State Vigilance Commission also remained only on papers. “No concerted step has been taken to set up Vigilance Commission”, she regretted and added that despite appointment of the Information Commissioner, government has been adopting delay tactics to appoint other members to make the Right to Information Commission functional in the State.

PDP chief observed that Cash for Vote scandal in which ruling party had managed vote of seven BJP MLAs in the Legislative Council elections was glaring example of the legitimization of corruption in the State. “There must be some deal between the National Conference and BJP MLAs because the former had not cast their votes in favour of coalition candidates without any consideration”, she equipped and regretted that the government has been brazenly indulged into such types of corrupt practices to undermine the credibility and respectability of the democratic institutions like Assembly.

PDP chief pointed out that people of the State had sacrificed their lives to establish democratic institutions in the State but the present dispensation headed by the NC has discredited such institutions by its mis-deeds and corrupt means.

In an obvious reference towards Chief Minister’s visit to different eating points on the day when coalition had managed BJP votes to ensure victory of coalition candidates in Legislative Council elections, she remarked that the Chief Minister was celebrating defection which has set an wrong precedent in the state politics. She reminded that during the PDP-Congress every effort was made to maintain credibility of the democratic institutions so as to restore peoples’ faith in such institutions.

Coming down heavily on state government for adopting oppressive measures to gag dissent voice, she said that this regime, since its formation, has been mis-using state apparatus to stifle genuine aspirations and wishes of the people. “Instead of addressing grievance of the people, this regime usually threatens people to book them under draconian laws if they dare to highlight their woes”, she pointed out and warned that such methods being adopted by the government would be proved disastrous for the State. Using strong arm method to crush voice of the people has become a policy of the present regime, she said and observed that it was result of this policy that alienation has been increasing among people with every passing day.

Pointing towards rampant corruption in the administration, she observed that backdoor appointments have been going unabated as ruling elites mis-using their positions to recruit their blue eyed boys on government jobs. She regretted that the present dispensation has discredited the highest institutions like Public Service Commission through its mis-deeds. She also pointed out that government has also given re-employment to large number of officers/officials which was also a corrupt practice.

PDP chief said that law and order situation in the entire State has been deteriorating because the police has assigned the administrative job. She especially mentioned that during the last some days, a number of youth have been killed and it was clear example of the deteriorating law and order situation in the State. She further mentioned that since formation of this regime over a dozen females have been shot dead under mysterious circumstances.

Filed under: Politics, World
Share Tweet Pin G Plus Email
previous article: Royal Wedding: Security a major concern for British cops
next article: The difference between a canal and a river