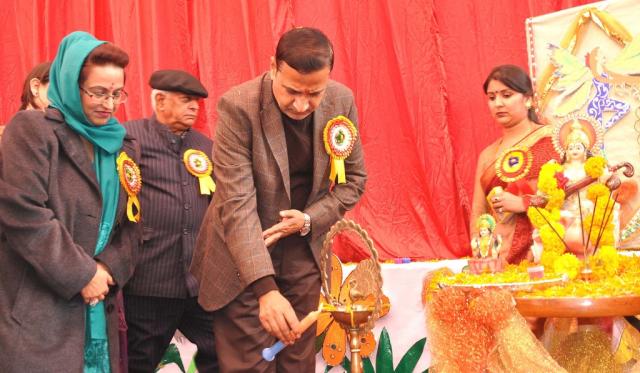 Kathua/Jammu, December 31 (Scoop News) –As a part of campaign against the female foeticide and to promote the girl child, the State health department will dedicate year 2013 to the daughters and observe the New Year as “Save the Girl Child”.

This was stated by the Minister for Health & Family Welfare,  Sham Lal Sharma while addressing the parents, students and teachers at an Annual Day function of Indian Public School (IPS) at Kalibari-Kathua today.

Seeking overwhelming support of society to curb the menace of female foeticide, the Minister said that only Government efforts are not sufficient to deal with this human issue, but entire society has to contribute for this. He said the Government has already sought help from the religious, social organizations to fight the challenge of saving the girl child to maintain the sex ratio and a positive response has come to fore, adding that need of the hour is to step up efforts to achieve the desired results.

Expressing grave concern over the increasing number of eve teasing and harassment to the women folk, the Minister said that attitudinal change is must to keep a check on such heinous crimes which shake the confidence of the society. He strongly advocated for change in the present educational set up and suggested to introduce moral education subject in every school from primary level. He said parents and teachers have also greater role to play in this direction and they must instil the moral ethics and rich ethos of Indian culture in the students so that they become good citizens and contribute for the welfare of the society and nation. He said on the eve of New Year “we all should take a pledge to save the Girl Child and raise our voice against the crimes against the females and to contribute for a healthy and prosperous society”.

Lauding the role of private sector in the education field, the Minister said the private institutions are doing excellent job and supplementing the government’s efforts in improving the literacy rate in the State. He appreciated the performance of Indian Public School for providing quality education to the students with special focus on the extra-curricular activities. He impressed upon the management to prepare the students in such a way that they easily compete in different fields to achieve their goals in the present scenario. He stressed the need for nurturing the hidden talent of the children in different activities for their overall development.

Chairperson of the IPS, Ms. Anu Dogra presented the annual report of the school and listed some new initiatives to upgrade the standards of the school. She said the management is determined to keep pace with the changing trends of the modern education and earnest efforts will be made to achieve the goals of excellence.

The children presented mesmerizing cultural bonanza on contemporary culture and social evils. The jam packed audience enthralled by the performance of tiny tots.

The Minister also distributed prizes amongst the students and teachers who excelled in academic as well as extra-curricular activities.