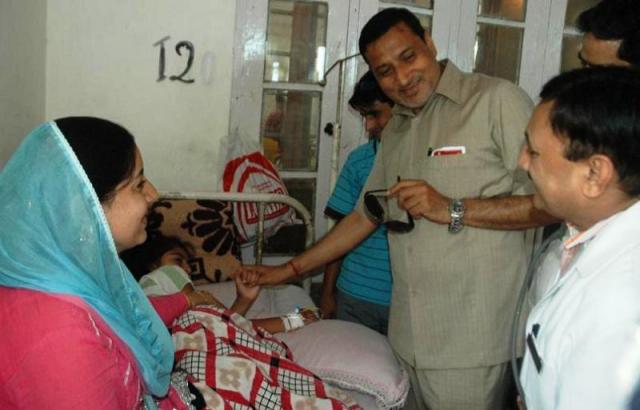 Doda/Jammu,August 31 (Scoop News) – To assess the health care facilities being provided to patients infected by Gastroenteritis (Diarrhea), which has spread in some parts of the Doda region, Minister for Health, Horticulture & Floriculture  Sham Lal Sharma visited District Hospital Doda and took on spot review of the medicare delivery system being catered by the medical staff.

Interacting with the patients, the Minister enquired about the treatment and other basic health care facilities being provided to them in the hospital while directing the hospital authorities to provide every possible care to the ailing populace.  Appreciating  the prompt role of Doctors,  Army, Paramedical Staff, NGO’s and civil society in checking the spread and timely of the epidemic, the Minister said that the speedy action of the Administration, Army and Health authorities led to the immediate control of the epidemic with negligible loss. He said that adequate supply of the medicines have been made available to the District Hospital Doda to deal with the situation and said that medicos have done a commendable job by providing 24 hours service to the patients.

The Minister underlined the need for formulating a long term policy for providing better health care facility and said that after identification of the root cause of the spread preventive measures would be taken to avoid occurrence of such type of situation in future. Reiterating the commitment of the present coalition government in providing all the basic amenities to each individual, the Minister said that providing of best health care to the far flung areas of the state forms the priority of the government. Regarding deficiency of medicos and paramedical staff,  Sharma assured that the vacant posts of Doctors and other Paramedical staff will be filled soon.

Giving detail , Doda, Dr. Mohd. Fareed Butt revealed that out 1411 patients who came to hospital with gastroenteritis infection about 98 patients are undergoing treatment while rest have been discharged from the hospital after treatment. He said that the number of patients complaining gastroenteritis is decreasing day by day.

Later, the Minister convened a review meeting of the officers of Health department and directed them to provide medicines and other treatment free of cost to the patients. The Minister said that services of ASHA’s should be utilized for creating awareness in rural and far flung areas of the region. Minister interacted with the Central Medical Team which has come to Doda to ascertain the actual reason of the out break of the epidemic. The team informed the minister that collection of samples from Sources, Filtration Plant and Reservoirs of drinking water is under progress and the results will be submitted soon.

The Minister also inspected CHC Banihal and Medical Camps at Health Sub-Centre Kaskote where gastroenteritis infected patients have been admitted and undergoing treatment. He interacted with them and enquired about their health and treatment being provided to them. He directed the hospital authorities to ensure best medicare treatment without any laxity. MLA Banihal  Vikar Rasool Wani, DDC Ramban  K.B Magotra, SSP Ramban besides officers of health accompanied the Minister. The Minister convened meeting with officers of Health and District administration in which it was revealed that out 731 cases reported most of the patients have been discharged after getting treatment and the spread of infection is under control.

Filed under: Health & Science, World
Share Tweet Pin G Plus Email
previous article: Dragon spreading its tentacles fast in PoK & in Gilgit : Dr. Nirmal
next article: Back to School/Back to Frantic? Here’s help in the kitchen… Six Ways to Get Kids to Try New Food