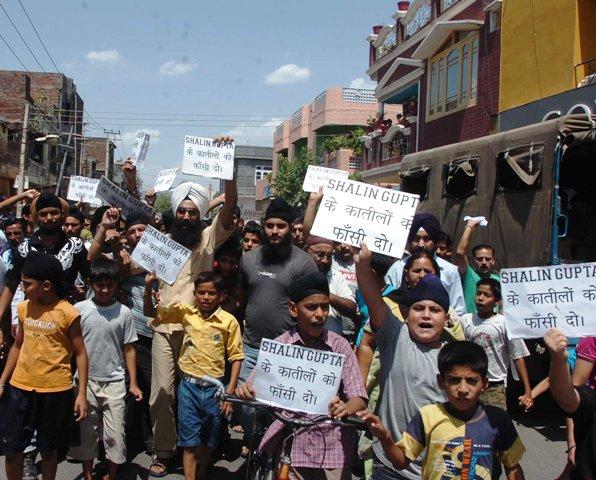 In his condolence message, Mr. Bhalla said described the killing of the minor boy as a shameless incident adding that identified criminals would be dealt under law. He said that instructions have been issued to the Deputy Commissioner   and SSP Jammu to conduct an inquiry into the gruesome act and put all those involved in the murder of the boy behind the bars. He expressed his heartfelt sympathies with the bereaved family and prayed for eternal peace to the departed soul.

Regarding the allegations leveled against him, he said that by doing so some anti social -elements made a desperate attempt to come in limelight. He said that people of Gandhi Nagar Constituency are his eyes, ears and arms   adding that being a local MLA, it was his duty to protect their lives and properties. He said that stern action will be taken against the accused   involved in the heinous crime. He assured that the Government will go into the bottom of the case and provide full support to the family of the victim.

The Minister assured that all those involved in the heinous crime will be prosecuted under the law so that none dare to commit such an act in future.  Assuring fair investigation in the case, he said stern action will be taken against any official found showing any laxity in the course of investigation.

Expressing her grave concern over brutal murder of a class 5th student who was earlier kidnapped and later stabbed to death, leader of opposition and president of  Mehbooba Mufti today said that law and situation has been deteriorating in the State with every passing day and the government has completely failed to protect lives of innocent citizens.

She said that on the one hand human right violation has been going uncontrolled in Kashmir Valley, criminals- with the connivance of ruling party leaders, have been committing crimes without any fear in Jammu region.

“Killing of a 5th class student within 8 hours after his kidnapping speaks about prevailing lawlessness in the State”, she said and added that such incidents authenticate the allegation that patronizing criminals and legalizing corruption were the only noticeable achievements of this regime.

“Instead of protecting lives of the people, government’s only agenda is to corruption and crime as corrupt leaders of ruling party are hand in glove with the criminals to further their petty personal agenda”, said Mehbooba, who arrived Jammu this afternoon.

While strongly condemned killing of a innocent student at by kidnappers, PDP chief demanded a high level probe into the whole episode to ascertain the truth. She pointed towards reports that one of the main accused was released at the behest of some politicians and warned that PDP would not tolerate if any person who was directly or indirectly involved in this incident would be shielded by the government.

“This is policy of the government to shield those who have been involved in killing innocent people”, she said and regretted that the present dispensation has been repeating the same blunders which were committed by the earlier regime headed by National Conference. She also mentioned that responsibility should be fixed on police officers who failed to act timely to protect life of a class 5th student. “It is really shameful that police took the kidnapping case casually despite being the fact the officers were aware that ransom was demanded by the family of the deceased boy”, she said.

PDP chief expressed sympathy with the family of the deceased student and prayed the Almighty for the peace of the departed soul.

BJP Jammu & Kashmir has condemned the kidnapping and cold blooded murder of a 5th class boy from Nai Basti Jammu here today. He demanded thorough CBI inquiry into the matter.

In a press statement issued here today BJP leaders said, “Yesterday was the day of shame that first incident of its kind which shook the people of entire region when innocent 10 year old boy Shalin Gupta being kidnapped and murdered for a ransom”.

They said that this has shocked every peaceful citizen and demanded that stern action should be taken against the accused so that the same could act as deterrent for other criminals.

Raising apprehensions, leaders questioned that when one of the main accused was arrested by the police under whom pressure police let off the accused resulted into brutal murder of Shalin.

Quoting the news published in different section of media, statement said, “The reports came in media that Davinder was released even though he turned out to be the main accused, reportedly at the behest of the political leader (name mentioned in Daily Excelsior)”. ‘Had that political leader not compelled the police to release the main accused, the innocent Shalin may be with us alive and safe’, mentioned BJP leader.

“The name of leader who compelled police to let off the main accused Davinder Singh should be made public”, they demanded.

They  also demanded that those who initially defended the main culprit Davinder should also be subjected to question in this episode.

Leaders maintained that this is now the testing time for Police authority to prove their credential so that such shocking incident could not be happened again in .

BJP expressed sympathy with the family members of the deceased boy and conveyed deep condolences to share the unbearable grief of the family.

They demanded thorough CBI inquiry into the matter.

A grand rally was organised by the members of NNO under the chairman ship of its president S.Harjeet Singh the rally was started from the main chowk Karan Bagh to Satwari Main chowk the protestants were having placards on which it was described Shalin Gupta Ka Katilo Ko fanci do (Hang the culprits who murdered Shalin Gupta).In the rally  the president requested the Govt. to take stern action against the culprit who killed the innocence Shalin Gupta for the ransom for rs 10 lakh the president was shocked this is the first incident in J&K state. He urged the police to be vigilant so that such happenings would not occur again in our state.He also urged the Govt.to constitute fast track courts so that the justice to the innocents be given in short time.                     The protesters after Satwari Main crossing started their protest with Shouting Slogans and Reached Main Bazar of Nai Basti and then the protest was culminated at the house of late Shalin gupta where protestants pray for the eternal peace to the departed soul of innocent Shalin Gupta and Courage to bear the loss to the family members.

State general secretary Nationalist Congress Party incharge frontal organisations Rajesh gupta expressed deep shock and anguish over the murder of a child for ransom first time in the history of .