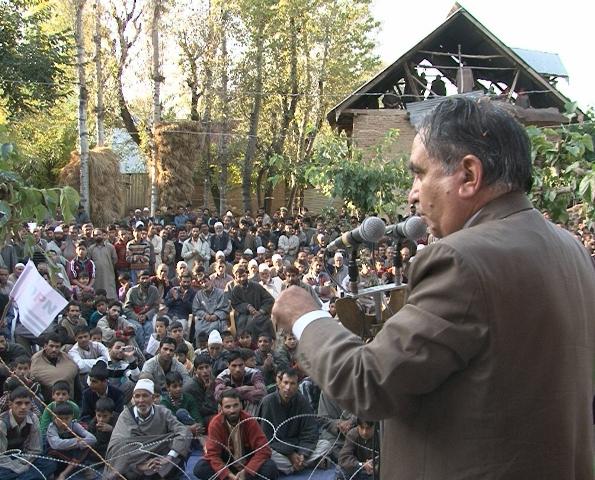 KUNZER/Srinagar, October 26 (Scoop News) –  For realizing the dream of prosperous J&K, Minister for Agriculture . Ghulam Hassan Mir Wednesday called upon the people particularly youth to tape the unexplored sources of the state for the welfare of the people.

The Minister was addressing a mammoth gathering here this afternoon. He said J&K state has an abundant Karewa land resource which has remained unexplored due to non irrigation facilities. He said in this regard the present coalition government has formulated a comprehensive plan for the irrigation of the Karewas by way digging bore wells and construction of water harvesting tanks and check dams.

Mir said, that he took up this issue with Prime Minister of India Dr. Manmohan Singh during his last visit to the state and which has resulted in  Central Government has agreeing  to provide sufficient funds under the programme to tape the potential of Karewa land resources by way of providing irrigation facilities. He said that Agriculture, Horticulture and Rural Development departments are providing subsidies of Rs. 2 lakh each to the farmers for digging of per bore well. He said under this programme Rs. 1. 75 crores are being spent on this project for providing irrigation facilities to the Karewas of Chichlora, Waripora, viagam, which is near completion.

The Minister called upon the farmers to come forward and avail the benefits of various schemes launched by the government to boost Agriculture and Horticulture activities across the state. He said that the time has come to tape the ground water resources for irrigation and drinking water facilities besides steps are also being taken for the preservation of rain water. He said that without adopting advance technology in Agriculture and its allied sectors, the state could not achieve the target in self sufficiency in food production.

Referring the handicraft potential of the Waripora and its adjacent areas, the Minister called upon the youth for setting up of Cooperative Societies for promotion of handmade handicrafts which has available abundant market across the globe. He said this would help to preserve a traditional handicraft industry of the state besides strengthening of the economy of artisans.

Regarding the demands put forth by the people, the Minister assured them that all the charter of demands could be addressed in a phased manner.