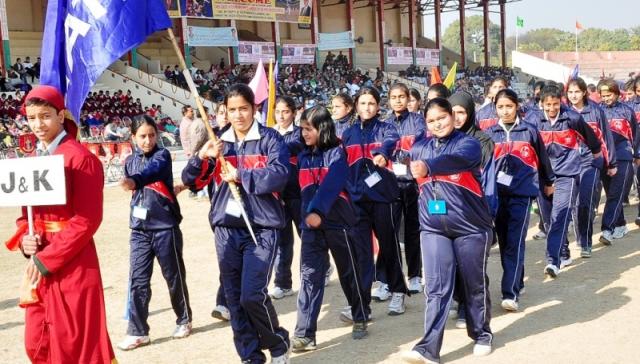 During this mega event, two tournaments viz cricket under-19 Girls and Wushu under-19 Boys & Girls are being played in which 25 teams from 19 states and are taking part.

Speaking on the occasion, the Minister appreciated the organisers of the event and extended a warm welcome to the participating teams. He hoped that this national sports event will immensely help the state to reach new highs in the world of sports. He appealed all the players to play their games with a missionary zeal and team spirit as they are not only representing their sports talent but symbolize the culture and traditions of their respective states.

The Minister said that it is a privilege for the state to host such a mega event and would go a long way in boosting the morale of our young sportspersons who will get an opportunity to learn new things from the other participating teams.

The Minister asked the participating teams to go to their State as peace ambassadors of J&K and tell their people about the changed air in the sub-continent. He said that during the last few years the situation in the state has changed a lot which needs to be conveyed across the world. “This will greatly help in boosting the tourism profile and economy of the state”, he added.

Chib said that such National Games provide a platform to us to share our culture and traditions besides further cementing the bonds of love and brotherhood. He said that we should optimally utilize such occasions for betterment of our state.

Spelling out the measures being initiated for development of modern sports infrastructure in the state, the Minister said that although during the last over two decades J&K suffered a lot on every front but the government under the statesmanship of Chief Minister Omar Abdullah has successfully brought the shattered system back on track. He said the government has launched a number of revolutionary reforms in the sports sector to promote certain games and the sports talent of youth of the state. He also appreciated the role of military, para-military and other security forces for helping in bringing peace and normalcy in the state. He said that fortunately the Chief Minister himself is most keen in promoting sports in the state which is yielding good results on ground.

Making a mention of various district, state and National Level sports events played in the state during the last 3 years, the Minister said after successful conduct of Kashmir Premier League in Cricket the government is going to hold Jammu Premier League in which players from 10 districts will take part.

Earlier, a colourful cultural bonanza was presented by the students of Samba district.

The inaugural match will be played between J&K  and Delhi at M A Stadium.

Later, the Minister interacted with the players and coaches and wished them success.