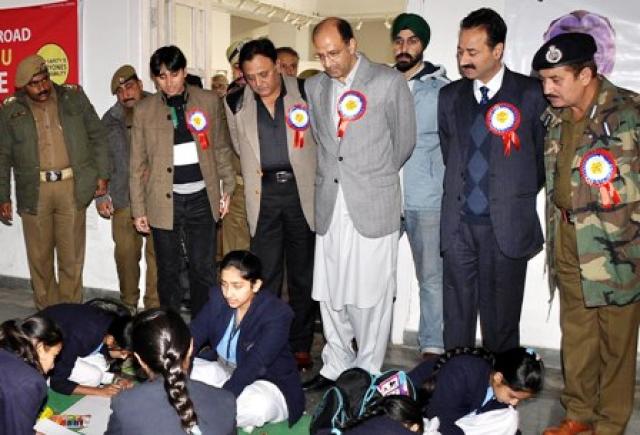 , January 04 (Scoop News) – Minister of State for Home,  Nasir Aslam Wani, today stressed upon the people, especially the younger generation to strictly adhere to the traffic rules to avoid accidents besides having a better traffic management.

The Minister said this after inaugurating a painting competition on Road Safety Week Drive at Kala Kendra Jammu organized by the Motor Vehicles Department in collaboration with J&K Traffic Police.

“Government can make and implement rules but those norms cannot yield desired results unless the people rigorously follow the same in a true spirit”, the Minister.

The Minister exhorted upon the Transport and Traffic Departments to make the Road Safety Week a meaningful exercise by disseminating information and awareness about Road Safety and strict enforcement of rules. He further stated that observance of traffic rules was absolutely imperative for having smooth traffic flow besides safety on roads.

Nasir appreciated the collective efforts taken up by the Motor Vehicles Department and the Traffic Department in celebrating various events during the Traffic Week. He stressed on the need to involve the children in road safety campaign as the children can be the right messengers of spreading the message further among their peer group and the elders

Terming the painting competition as an informative and educative event, the Minister said such competitions could inspire the young buds about the value of following traffic rules. He was happy to note that the children had very creatively made drawings and sketches highlighting different aspects of road safety rules.  He also watched a documentary film made by the traffic department on observance of safety in school buses.

Transport Commissioner, Mehraj Ahmed Kakroo, highlighted the role of children in spreading messages of social relevance and assured the Minister that the Transport Department and Traffic Department would carry on the activity of enforcement and awareness throughout the year with equal zeal and fervor as is being done during the traffic week celebrations.