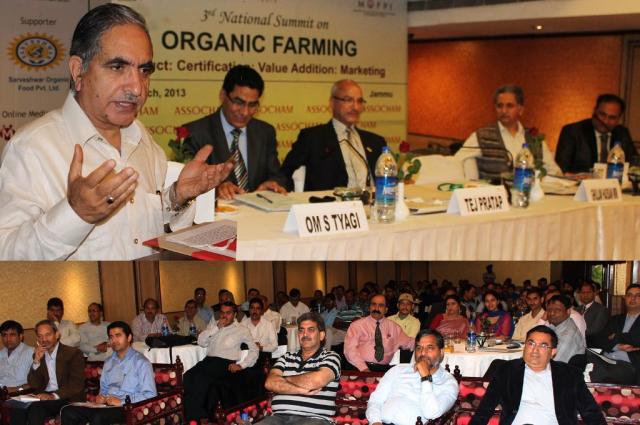 , March 18 (Scoop News) –The Minister for Agriculture Production  Ghulam Hassan Mir today said that a team of students from the field of agriculture shall be nominated to conduct a study to develop systematic approach and plan for promotion of organic farming among the farmers of the State.

The Minister said that State offers immense potential for organic farming in the State and the government will take all out efforts to promote it in a big way. He also informed about several steps taken by State Government in order to highlight the importance of agriculture in the all-round growth of the State’s economy.

The Minister said that soil’s fertility is decreasing day by day due to use of chemical fertilizers and under such circumstances the farmers have to adopt the Organic farming. He said that organic farming was picking up pace in but the sector has been jostling with lack of awareness, knowledge and    confidence about its use and   subsequent food products among both farmers and consumers.

The Minister said that in the farming system  a piece of land is used optimally             and to its fullest potential to produce a range of nutritious and healthy food as  well as other required commodities in a manner which can healthily feed a small family, and maintain soil health and productivity by agricultural practices based on principles of organic farming.

The Minister said a large area of cultivated land in the State is already under semi-organic cultivation by default of remote areas in hilly districts of the State due to the non-availability of chemical fertilizers in these areas. He said that Basmati rice of R. S. Pura, Rajmah of Bhaderwah, potato of Gurez and Machil and red rice (Zug) of Tangdar Kupwara are major exportable organic products and have the potential of better returns in the national and international markets.

The Minister focused to explore markets elsewhere in the country and abroad for its saffron, basmati rice and rajmash among various other agricultural produce, the Jammu-Kashmir government is adopting organic farming in a systematic manner.

He said that the farmers of Jammu & Kashmir should tap the opportunity of the growing demand of “Organic Products” in as well as across the globe.  He said that the state of J & K can also take a lead by promoting Organic Farming Practices & becoming the first “ ” of .

Vice Chancellor, of Agricultural Sciences and Technology, Kashmir (SKUAST) Prf. Tej Pratap, In his Address, said that the State of J & K saying no to chemical way of farming in the near future. "State of J&K is a natural place to go organic, the state has a vast potential in that respect. He also said that Organic agriculture is generally perceived as a form of agriculture that is more favorable for the environment than conventional agriculture.

He also said that Organic farming comes closest to an environment friendly agriculture with increased soil conservation and enhanced biodiversity. He said that the State already have large swathes of land farmers are growing walnuts and herbs organically. On 32,000 hectares of land, mostly in the countryside, farmers do not use chemicals at all. Many of them export walnut, saffron and almond and fetch handsome amounts. While the walnut is organic, farmers can even grow saffron organically." He said that there is a need of the hour, to take up the Organic practice on a much larger scale.

Besides the Research Scholars, Professors, Faculty members, Scientists and media persons a large number of farmers attended the daylong conference.