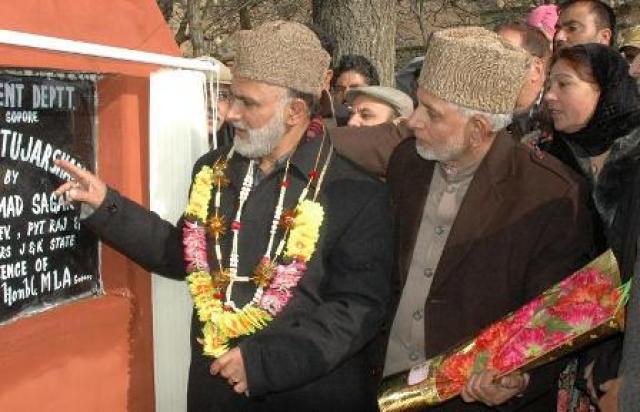 , December 13 (Vijay Kumar) –Minister for Rural Development,  Ali Mohammad Sagar has said that the issue can be resolved through dialogue and Chief Minister,  Omar Abdullah is also hopeful that a lasting solution would be found very soon.

The Minister was addressing a public gathering after inaugurating a model village at Tujjar Sharief, Sopore. He also announced Rs 30 lakh for construction of a sarai there.

While referring to the hollow slogans of certain parties,  Sagar said that they are trying to befool the people as situation has shown considerable improvement and normalcy has been restored. The Government has undertaken various welfare schemes for the betterment of people, he added. “We appeal the people not to pay any heed to the false sloganeering of certain vested interests and instead come forward to avail the benefit of various schemes. You can very well judge between the fact and fantasy and the Government believes in action rather than rhetoric”, he added.

The Minister said that the Government does not give preferential treatment to any particular area or region but believes in equitable development of all the three regions of the State. He said in order to provide uninterrupted power supply to the people, the Government is contemplating to construct mega receiving stations at Mir Bazar Anantnag and Budgam districts.

Sagar said that the Centre has been kind enough to provide adequate funds for the developmental works; we will ensure that it is utilized to its maximum and directions have already been passed to the concerned officers to speed up the pace of implementation of various schemes and developmental programmes.

Describing new employment policy as a historic decision,  Sagar said that by this policy employment would be provided to the unemployed educated youth and the people who are criticizing the step are working against the interests of the youth of the State.

The Minister said that about 126 houses have been constructed under IAY scheme and an amount of Rs 64 lakh has been spent under the NREGA scheme in Sopore.