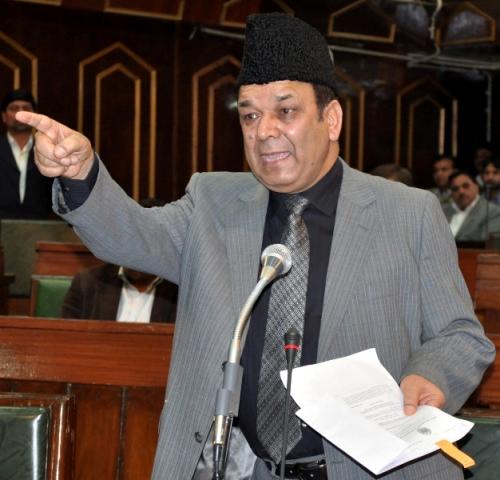 Jammu, March 10 (Scoop News) –  Maintaining that the State is moving forward in right direction to minimize the fiscal deficit, as per the guidelines and principles laid down in the J&K Fiscal Responsibility and Budget Management (FRBM) Act, the Minister for Finance and Ladakh Affairs,  Abdul Rahim Rather today forcefully rejected the criticism made by some Legislators during the debate on Budget that the State was falling in a debt trap.

Replying to the debate on budget, which was presented by him on March 6, 2012 in the Legislative Assembly,  Rather today said the State has been able to contain the fiscal deficit to 4.2% against the target of 5.3% fixed by 13th Finance Commission which, he said is a matter of satisfaction. This achievements becomes more significant when viewed against implementation of the 6th Pay Commission recommendation and the government decision to pay off the arrears. He said the wage bill including pensions has touched an all time high of Rs 16,140 crore, a phenomenon which is beyond any body’s control. What is more important, he said, is that the State has excelled in the field of internal resources mobilization. He added that the state’s tax revenue has increased by 38% during the current financial year as compared to last fiscal. “As against the revenue of Rs 3480 crore realized last year, the tax revenue during the current year is about to touch Rs 4800 crore marking a quantum jump of over Rs 1300 crore, which is highest ever in the history of the State”,  Rather added. He said the current year’s collection under commercial taxes alone has gone up by Rs 1057 crore which is an increase of 42% over the previous year. The growth rate of tax collection for April to November 2011 of the was the highest in the country as per the figures which had been complied by the Secretariat of the Empowered Committee of the State Finance Ministers for all States.

Rather said that the GSDP during the current fiscal stands at 6.8% which is nearer to the national level GDP figure of 6.9%. “The growth in GSDP is strictly measured in accordance with the global principles and accepted as a major fiscal indicator, to ascertain the march of economy towards development and progress. He further said that the parameters calculating for per capita income and GSDP are fixed by the Central Statistical Organization (CSO) adding that the per capita income of Rs 41833 in the State has been calculated according to these CSO norms.

Dispelling apprehensions that the State is dependent on the Central funds,  Rather said that the J&K like other parts of the Country gets funding from the Centre from out of the divisible pool, which has been guaranteed under Article 268, Art.280 and Art.269 of Constitution of India. He said whatever funding the State receives from the Centre is its right under the Constitutional Scheme. Regarding additional resource mobilization beyond the present level of achievements,  Rather said “I will welcome any practical and genuine suggestions from the members of the House in this regard”.

Giving details about the newly introduced ‘ways and means’ system of the Reserve bank of India,  Rather said the new system has been working very satisfactorily to the mutual advantage of the State Government and the Jammu and Kashmir Bank. Under the new arrangement the State has been able to save interest payment to the extent of about Rs 219 crore so far in the current fiscal. “on the one hand, the J&K Bank made a record profit and declared an all time high dividend of 260% to its share holders. The over draft of Rs 2300 crore repaid to the Bank was re-invested by the Bank and it generated economic activities in the State,”

In his about 2 hours long speech,  Rather touched upon almost all the important sectors and gave details of development in horticulture, handicrafts, tourism sectors, preservation of water bodies in the State, construction of hospital buildings and issues regarding regularization of the services of agriculture technocrats and daily wagers.