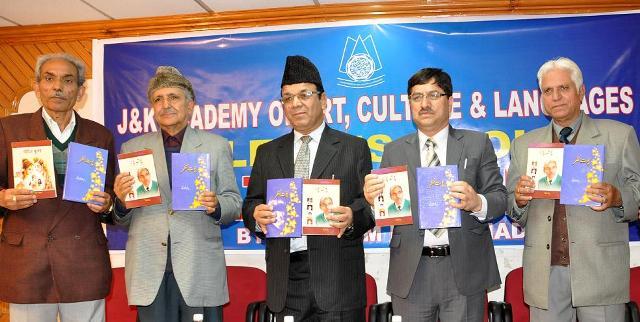 Jammu, February 26 (Scoop News) – Maintaining that poets and writers are the most powerful source for bringing big revolutions in the society, the Minister for Finance and Ladakh Affairs, Abdul Rehman Rather today called for getting an  inspiration from the writing of poets to live a meaningful life. He also called for promotion of mother tongues for preserving identity.

The Minister was speaking at an impressive function held here at  K. L. Saihgal Hall of Jammu and Kahsmir Academy of Art, Culture and Languages to mark the release of two books "POT NANZAR” and “POSHI POOZA” written by famous Kashmiri poet  Prem Nath Shad,  Rather said called for  acquainting younger generation about the writings of local poets and writers who have always propagated pluralistic ideology and real Kashmiryat through their artistic works which contribute in conserving and  upholding the rich cultural ethos of the State.

Rather said latest books of  Shad have contributed more in the rich literary treasure of the State adding that “I am proud that the Poet hails from my homeland”. He said he had himself a yearning to be a writer but destiny did not allow to fructify the dream.

M. Y. Taing and Dr. P. N. Trisal also presented their views on the publication of  Shad and said his poems reflect yearning of Kashmiri migrant community for dignified return to their loving motherland, . His poems present rich traditions of Kashmiryat which is the hall mark of our rich cultural ethos. These poems have presented traditions of and its natural beauty in a befitting manner.

Famous Kashmiri signer, Gulzar Ahmad Ganai presented a Leela from the poems of the poet which mesmerized the audience.