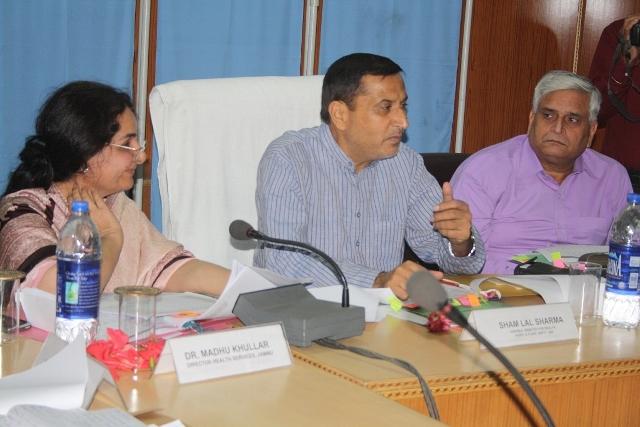 The meeting was informed about the patients treated at OPDs, IPD, besides Surgeries, Deliveries, LSCS, Ultrasound conducted during the current year till September.

The meeting was also informed about the Referrals, revenue realization and expenditure in each district of Jammu division.

Speaking on the occasion,  Sham said that government was committed to provide better medical facilities to the people in every nook and corner of the State for which the centre is providing liberal funding under various health care schemes. He also called upon the concerned CMOs and Medical Superintendents to render their service with dedication and missionary spirit and uphold the dignity of their noble cause.

Underscoring the importance of various programmes aimed to bring   a healthy change in the living condition of the people and provide better healthcare facilities to poor and needy,  Sham highlighted the role of medicos in the implementation and monitoring of the schemes.  He asked them to make every effort to ensure that the benefits reach to the targeted population. He said that the prestigious Rashtriya Swasthya Bima Yojana (RSBY) initially launched in and would benefit around 66,000 BPL families of the twin districts of and . He said the scheme would be extended to all the district of the State in due course of time.

Sham directed the doctors to treat patients with empathy and full professional responsibility having high regard for medical ethics in their patient care. He also asked the CMOs to take care of the problems being faced in periphery hospitals. He also directed the medical superintendents to ensure better administration within their respective hospitals and send the report in this regards to the concerned director. He also directed the concerned to improve   working condition in the hospitals particularly with regard to   OPD, IPD, surgeries, deliveries, LSCS, Ultra sound and referral system and revenue.

He said that is providing 90 percent patient care in public sector and was marked No. 1 in the country. He said the government has started laproscopic, surgery and improved over infrastructure at district level hospital. He also took serious note on sudden fall of patient care and OPD of some district hospital and peripheral hospitals.

Later, the Minister also visited the Jeo Pota Ghat at Akhnoor and reviewed the progress of work done by the tourism department. He instructed the executing agencies to speedup the work and completed within stipulated time frame.