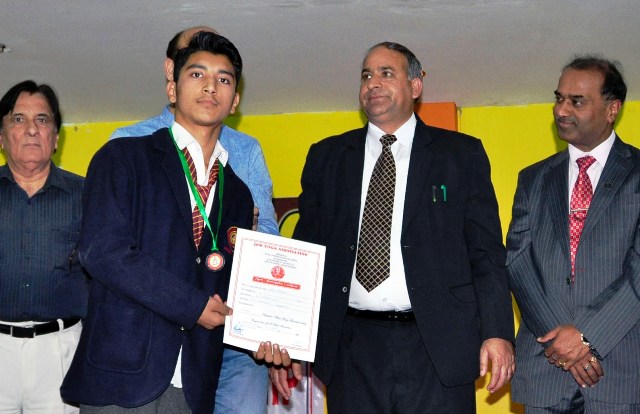 Jammu, November 09(Scoop News)- Emphasizing the significance of yoga in the present stressful times, Minister of State for Health, Shabir Ahmad Khan has called upon people to benefit from this time tested and ancient concept in a big way.

Addressing the concluding function of J&K State level Yoga Championship held today at Handa College of Education, Jammu, the Minister said yoga not only helps in shaping the physique and sharpening the mental facilities within a human but also inculcates the sense of discipline among the practitioners. He said Yoga helps in building a healthy and harmonious society.

The Minister said that Yoga helps children see the beauty and light within themselves, thereby boosting their self-confidence, allowing them to feel more comfortable with their bodies, and helping them get in touch with who they are inside. He said a child who learns yoga, mindfulness and relaxation will be developing essential skills for a lifetime of health and wellness in mind, body and spirit.

The Minister while appreciating the role of organizers said that such efforts prove much beneficial for keeping the youngsters in good physique and sound health to compete the modern world challenges. He also wished organizers and participants a great success in their endeavors.
The Minister said that Jammu and Kashmir is all set to become the first state in North India to implement Rashtriya Bal Swasthya Karyakram (RBSK) – Child Health Screening and Early Intervention Services – in all the districts under National Rural Health Mission. He said that RBSK is a new initiative undertaken by the Union Health Ministry and is aimed at screening children from 0 to 18 years for 4 Ds – defects at birth, diseases, deficiencies and development delays including disabilities. He said children diagnosed with illnesses shall receive follow up including surgeries at primary, secondary and tertiary level, free of cost under NRHM
The Minister also distributed medals, certificates and momentous among the winner students besides award of honour to the members of yoga organization.
On the occasion, the Health Minister was also presented a memento by the President of J&K Yoga Organization. He highlighted that this year there was a marked improvement among the student performers and said this was due to the hard work put in both by the students and their instructors.