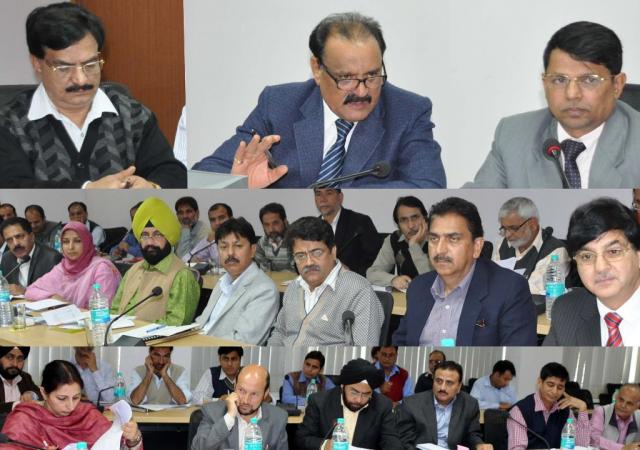 , November 16 (Scoop News) –The Minister for Industries and Commerce,  S.S. Slathia today urged for achieving 100% physical and financial targets fixed for the current fiscal for various departments and PSUs under Industries and Commerce sector. He said since funds are being released timely, so there should be no room for their non or under utilization.

Speaking at a review meeting of various departments and PSUs held at Udhyog Bhawan, today,  Slathia warned the concerned Heads of departments and PSUs of any kind of default in accomplishing the assigned physical and financial targets in full, observing that there was urgent need to bring more transparency and efficiency in the implementing agencies at ground level.

Slathia also called for a vibrant monitoring mechanism to gauge the pace of development works and utilization of funds adding that the departments under the Industries and Commerce sector are directly linked to the livelihood of the people. “Industrialization is imperative for employment generation”, the Minister asserted.

Speaking on the occasion, the Commissioner Secretary Industries and Commerce,  Shantmanu urged for capacity building in Industries and Commerce sector and called for maximum utilization of land in various Industrial Estates of the State for expanding and activating Industrial activities. He said maximum number of local youth should be provided job opportunities in the Industries. He also urged for giving further fillip to increase the pace of works commensurate to the targets assigned for different department and PSUs.

The meeting took sector wise review of the plan performance of the current fiscal and proposed targets for the next financial year.